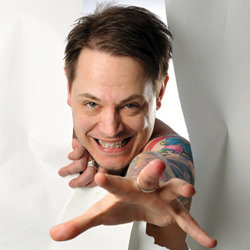 Award-winning comedian Jim Smallman (BBC 5Live's Fighting Talk) has dedicated his life to work, losing friends along the way. Now he wants new ones, and he's looking at you. ***** (NewCurrent.com). 'Wonderfully gritty' (Guardian).

Award winning Jim Smallman returns to the Edinburgh Festival Fringe, once again taking residence at the Gilded Balloon for his second full hour.

Jim has never grown up, and now in his thirties he still spends his time playing video games and generally being an overgrown adolescent. His friends that he grew up with have all got married, all have kids and can't to come out to play anymore. His best friend from school has chosen this regrettable path and Jim has been deemed a bad influence - and therefore an unsuitable acquaintance - for his old chum.

Discovering how difficult it is to find friends in his thirties, Jim has set himself a task of finding a brand new best friend to hang out, play games and go on holiday with! With the constant reminder that twitter followers are not actual friends, Jim will be auditioning the unsuspecting audiences of the Edinburgh Festival to fill his best mate's shoes.

With videos from several of his famous pals from comedy and beyond, wide-ranging silliness, musical outbursts and some audience participation; he has derived some intriguing questions resulting in a contest where the winner will inevitably find him or herself a new best buddy in Jim - whether they like it or not.

Jim Smallman has established himself as one of British comedy's most intriguing young comics in the seven years that he has been on the circuit. As well as performing all over the country, Jim has written for various publications, maintains a satirical football blog, and has appeared all over BBC Radio including BBC 4 Extra (The Boat Show), Five Live (Fighting Talk) and as presenter of his own show on BBC Radio Leicester. He co-owns a wrestling promotion called PROGRESS in London and also presents a regular TV show covering the sport called The Slam.