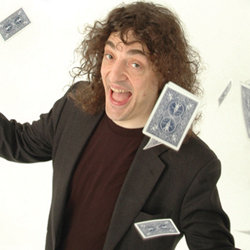 Jerry Sadowitz is best known as an offensive comedian but he is also one of the world's most skilled and creative card magicians. In this show you'll get to see some amazing sleight of hand and some original magic projected on a large screen which means you automatically get a front row seat without having to actually sit near the ****. Please note that this show is not suitable for anyone with less than £15.50. 'Truly astonishing sleight of hand' Guardian. 'Genius ... astounds, amuses and appals in equal measure' (Times).