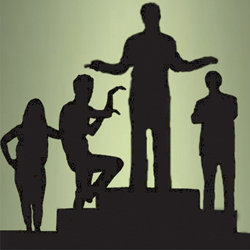 From the silly to the surreal, feast on our tasty spread of comic delights ending in the spectacular Cult The Musical. There will be attempted dancing and up to one song. **** 'Stark comic quality' (Remotegoat.co.uk).

The Intimate Strangers are an established sketch comedy troupe bringing their show to the Edinburgh Fringe for the first time, fresh from sell-out previews in Bristol and London.

Silly and surreal, the show culminates in the spectacular Cult The Musical, a musical about Scientology that celebrates the rise and fall of Tom Cruise and Katie Holmes (their impending divorce being a massive stroke of luck for us). Other sketches include Anne Frank, a tiger and people dressed as bees. Linking the sketches is a loose narrative strand in which the audience view behind the scenes of the sketches they have just watched. It's a bit like the play Noises Off but also nothing the same.

The Intimate Strangers is written by Matthew Radway. His short play Background Wildlife was staged at the Bristol Old Vic Theatre in 2010 and has since been developed into a radio sitcom. His television sitcom pilot Him (starring cast member James Taylor Thomas) was produced in 2011. Other cast members include Jack Fayter and Anna Goodman. The production manager is Chris Markham. The Intimate Strangers are managed by Confugium Stage.

The Intimate Strangers have also starred in their first web series. It aired on blip.tv in late 2011 and can be viewed at www.blip.tv