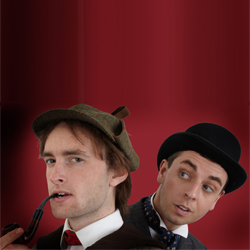 'Fast-paced entertainment at its very best' ***** (Oxford Times). 'Ingenious, people gasping and howling with laughter' (Banbury Guardian). Infectiously funny Holmes presented with panache! An explosive blend of murder mystery and irresistible comedy. Join Sherlock Holmes, Dr Watson, Mrs Hudson and Inspector Lestrade in an evening of mystery, amazement and excitement. Pit your deductive skills against those of the Great Detective as an unresolved case unfolds before your very eyes! This is your final chance to catch Holmes and Watson as they embark on their Farewell Tour. Don't miss them. It's elementary!