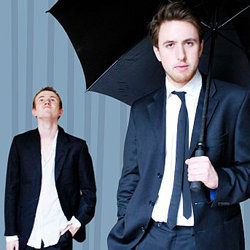 After a successful Fringe debut last year, Frimston and Rowett return to Edinburgh with their difficult second album, a collection of brand new sketches the like of which no man has seen and lived. **** 'A whirl of tight sketches ... brilliant.' (ThreeWeeks). 'A storming hour of side-splitting sketches.' (Spoonfed.co.uk). 'Consistently funny and completely engaging ... wonderful comic talents.' (TheGoodReview.co.uk). 'Very funny ... they perform the rare trick of not presenting a single flop of a sketch' (Londonist.com).

Following their successful Fringe debut last year, Frimston and Rowett return to Edinburgh with their difficult second album, Huge Mistakes. Robert Frimston and Edward Rowett met in the Cambridge Footlights in 2007 and have been writing and performing together ever since. The pair are a double act in the classic mould, equally inspired by the wordplay of Abbot and Costello, the innocence of Morecambe and Wise, and the sophisticated silliness of Fry and Laurie. Huge Mistakes is both a traditional sketch show, and a show about the trials of existing as a double act.

Since graduating in 2009 they have been regulars on the London circuit, running their own nights at the Canal Café Theatre. They have also performed extensively around the UK, appearing as part of the Oxford Fringe, the Manchester Comedy Festival, and the Sheffield Student Comedy Festival, performing to sell-out crowds and excellent reviews. This summer they are thrilled to be returning to Edinburgh with their brand new show.