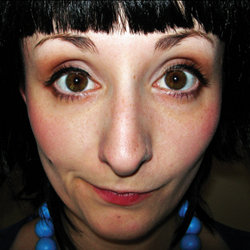 Writer/performer Lois Tucker returns as her wordless alter ego in this new irreverent black comedy, performed to a continuous soundtrack. Finding herself as part of an unlikely storytelling set up with only her wits and a bottomless suitcase to hand, Miss of the Lane will endeavour to entertain against all odds. For 2009's Super Situation - 'ingenious and hilarious' **** (Hairline.org.uk), 'Lois Tucker's silent, solo performance is undeniably brave and her on-stage presence is captivating' (ThreeWeeks).

Lois Tucker returns to the Edinburgh Festival Fringe as wordless alter ego Lois of the Lane in her new solo creation Fabled, directed by Angela Gasparetto.

This irreverent black comedy, performed to a continuous soundtrack of voiceover, music and sound effects, follows in the footsteps of her previous Edinburgh ventures Super Situation (2009) and Glitch (2006) and is her most ambitious project to date. With elements of storytelling, mime and clowning and utilising Lois' strikingly expressive face, the show also features 2 self-penned original songs and sees Lois ably supported by a 10-strong cast of voiceovers.

Finding herself as part of an unlikely storytelling set-up deep in the bowels of an unknown building with only her wits and a bottomless suitcase to hand, Miss of the Lane will endeavour to entertain against all odds.

Fabled previewed at Theatre503 and as part of the Holloway Arts Festival.

Lois Tucker performed her first solo show Glitch 5 times a week for a month at the British Library during their Taking Liberties exhibition in 2009. Praise for Super Situation at the Edinburgh Festival Fringe 2009 includes:

As well as acting, Lois writes and performs her own original songs and appears as Lois of the Lane on the cabaret/variety circuit, most recently at the Secret Garden Party. This is her 10th year at the Fringe during which time she's experienced the full month 4 times and been involved in various capacities including clowning around for comedy freakazoids Gawkagogo.