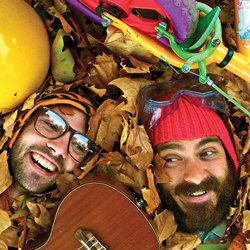 Join Dr Brown and his Singing Tiger on a madcap adventure from breakfast to bedtime with a ski race, tennis match and slightly spectacular BMX finale. Physical comedy at its best from two world-renowned performers. Winner, Best Presentation for Children 2012, Adelaide Fringe. 'Bonkers' (Sunday Times). 'Comedy for all ages' **** (Hairline.org). 'He does everything the children know you're not allowed to do and they are delighted' ****(FringeReview.co.uk). 'Very silly physical comedy ... if they like Mr Bean, they will love this' ****' (BroadwayBaby.com).

Hot on the heels of winning the Barry Award and the Director's Choice accolade at the 2012 Melbourne International Comedy Festival, Dr Brown returns to the Edinburgh Fringe with a brand new physical comedy for all the family, Dr Brown Brown Brown Brown Brown and his Singing Tiger.

A madcap adventure of bizarre physical flights of fancy and excesses of silliness adored by kids, adults, grandparents, teenagers and tigers alike.
Dr Brown is the stage persona of Philip Burgers, a London-based performer who has toured three solo clown shows across four continents in the past 4 years: Behaves, Because, and Becaves. He was named 2010 Best Newcomer by the Sunday Times, Time Out Critic's Choice in 2010 and was one of The Sun's Top Ten performers of 2011. He was nominated for a Malcolm Hardee Award for Original Comedy in 2010 and 2011 and Becaves was nominated at the 2011 Edinburgh Fringe for a Total Theatre Award.

He has followed this success with an equally acclaimed combo of shows in 2012. Befrdrfgth won Australia's premier comedy prize, the Barry Award (named after Barry Humphries) and Dr Brown Brown Brown Brown Brown and his Singing Tiger won the Director's Choice award at the Melbourne Comedy Festival in April and Best Presentation for Children at the Adelaide Fringe in March.

Phil is an internationally renowned visual comedy absurdist who trained at Gaulier's prestigious clown school in France, which also boasts Sacha Baron Cohen, Emma Thompson and Simon McBurney as former students. He has also led clowning workshops around the world.

His co-star the singing tiger is played by Stuart Bowden (The Lounge Room Confabulators, The World Holds Everyone Apart, Apart from Us and The Beast) who has won multiple awards including the Underbelly Edinburgh Award at the Adelaide Fringe 2011 and was nominated for the Arches Brick award at the Edinburgh Fringe 2011.