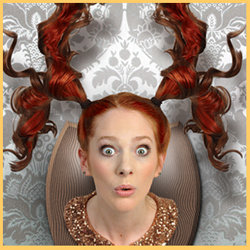 Award-winning comedian Diane Spencer returns with her hilarious new show about perspective. Part autobiographical, all stand-up from a rising star compared to Joan Rivers and Sarah Millican. This is Diane's third Edinburgh show after her wildly successful 2011 show All-pervading Madness. 'Spencer's way with words and her delivery are absolutely superb' (LondonIsFunny.com). 'A fierce core hides behind her cutesy stage persona' (Comedy.co.uk). 'Indiscreetly brilliant' (Scotsman). 'Raucously entertaining' (Chortle.co.uk). 'A staggering storyteller' (Sunday Express). Alcoholic ginger f*ck are other words that have been used to describe this former Wheel of Fortune contestant.

Her first Edinburgh show charted her dreams and aspirations; her second show All Pervading Madness was one journey home via hell and all its inhabitants. Exquisite Bad Taste is the fallout that followed; the invitations abroad, the backlash at home and the personal struggle of getting through her younger sister's wedding without punching the cake. A new perspective in womanhood, being ginger and being filthy the fitting metaphor of her spin on the Wheel of Fortune, this former contestant is not a ready for reality TV type but "an embarrassment to women" according to a drunken female heckler.

Since her Edinburgh debut in 2010, this unassuming freckled face English rose, and former secondary school teacher, has grabbed the comedy world by the balls unleashing a tsunami of filth upon her audiences and sliced her way through social boundaries with a sword of breath-taking honesty.

Diane has performed at festivals in New Zealand, the UK, and Australia, including the prestigious Melbourne International Comedy Festival. She's already recorded two DVDs: Lost In The Mouth Specific and 2009's recording of her solo show TamPomPom, rebranded Wit, Charm And Filth. Wit, charm and filth are qualities Diane has in spades. Striking looking and strikingly funny, she's ready to take Edinburgh by storm this year.