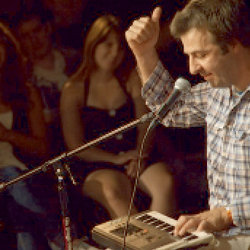 Winner, 2008 Edinburgh Comedy Award. Life is a marathon, not a sprint. But it is a sort of marathon that you really have to sprint. And there are hurdles and weights to lift. And swimming. And shooting. Life is basically the Olympics. But at the end you don't get a medal, you die. 'A national treasure' (Irish Times).