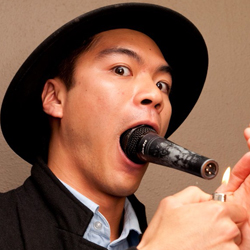 'Immediately likeable, relaxed, sharp' (Bruce Griffiths, winner, Australian Comic of the Year 1996, Writer for Good News Week [Australia's Have I Got News For You]). Crammed with various accents, impressions, audience banter, Arnie Pie takes you through a wacky account of his travels as a stand-up comic, growing up Asian, his dad's wise words, his random thought process and the cr*p he did and came across ... because he felt like it. Expect an hour of a little something for everyone ... who's well beyond puberty.