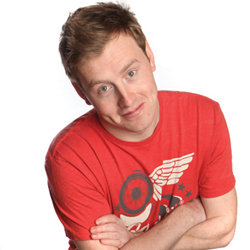 Irishman Andrew Ryan thinks life is one big board game, but are we rolling the dice? Do we need to take back control of our lives? Andrew explores how money can move us to places we might not want to go in his hilarious and incisive debut show. 'Utterly brilliant going to be a huge star' **** (Time Out). 'MUST SEE' (Stage).

Is life a board game? Is money moving us where we don't want to go? Irish comedian Andrew Ryan says it's time we took back control of the game in his hilarious and incisive debut Edinburgh show Ryanopoly.

After trading in his banking job for comedy, the Cork native has been heralded as one of the most exciting talents to emerge in the UK & Irish Comedy Scene in the last few years. Andrew's intensely likable personality and effortless delivery is sure to make him a fast Edinburgh favorite.

Ryanopoly takes a comical yet clever look at our society's obsession with money and why we needn't succumb to financial pressures. Andrew shows us through hilarious stand-up how to recognise when money is controlling us and how to avoid feeling pressured into spending money on things that we probably don't need, and how sometimes we can even have a little bit of fun when dealing with our financial institutions.

Andrew also shows us how even in this downtrodden recession focussed time, sometimes the best things in life are still free. The unique blend of Andrew's charm and friendly vulnerability will leave audiences with a warm glow and maybe even change the way they view the economy.