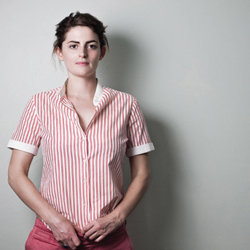 When Alice (Cooper) Met (Prince) Harry is a quirky and touching solo comedy theatre work by Sydney based performer Alice Mary Cooper. The piece is a playful fusion of sincerity and humour - think an Amelie-style clown meets Greek tragedy and classic BBC comedy. Tightly woven, the work uses autobiographical content from Alice Mary Cooper's life and twists it into something fantastical. 'Balanced between the banal and the surreal, and performed with a very deft touch, Clown Lights Stage is truly delightful' (RealTimeArts.net). 'Alice Cooper is mobile and articulate, expressive and immaculately nuanced...' (RipItUp.com.au).

Sydney Theatre maker, Alice Mary Cooper is rather excited, but if she's honest, also a little nervous. In less than a month she will perform her first international season of her solo theatre work When Alice (Cooper) met (Prince) Harry at the 2012 Edinburgh Fringe Festival.

Previously known as Clown Lights Stage, the work is a tightly woven physical comedy using autobiographical content from Alice's life, twisting it into something fantastical. The playful, quirky and touching solo physical comedy fuses sincerity and humour in which an Amelie style clown meets Greek Tragedy and classic BBC comedy.

People who attend Alice's production can expect no less than a great time as they follow the tale of a bright eyed, white pants wearing clown as she attempts to give a lecture on a topic she knows nothing about. Regular items in one's handbag - bus tickets, bank statements, tea bags - become bizarre tell-tales of their owner's life.

This will be the show's first international production following nearly two years of seasons at Fringe Festivals in Australia. The show has had continued creative development since its initial creation at Shopfront Contemporary Arts, Sydney where, in 2010, Alice was an Artist in Residence.

"I have been preparing for this moment for some time. The show has been through a lot of development over the last two years. I have produced the work at the Adelaide, Melbourne and Sydney Fringes, with the character and the story clarified each time through performance. I've been lucky to be mentored along the way by some very generous artists including performer, Rosie Dennis," Alice said.

When Alice (Cooper) met (Prince) Harry has been noted by several reviewers and publication over the past 18 months. Real Time magazine described Alice's work as a balance "between the banal and the surreal, performed with a very deft touch...truly delightful", ArtsHub gave it 4.5 stars and Augusta Supple selected it as "one of my picks of the festival" at the 2011 Sydney Fringe. Alice's performance was further described as "mobile and articulate, expressive and immaculately nuanced", by Adelaide's Rip it Up.