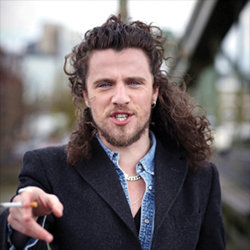 Alfie Brown is an observational comedian. He observes (occasionally screaming) the hypocritical standards of censorship in popular music, the irresponsibility of producing bad art and the unscrupulous homogenisation of comedy, whilst making you laugh. He also (comedically) observes a world in which greed comes before truth and how the heavyweights of the culture industries keep us addicted for profit, whilst - still - making you laugh. There is heroin in the gruel. Alfie Brown is truly funny. ***** (ThreeWeeks). 'Immensely self-assured and stylish' (Guardian).

We live in a world where greed comes before truth, and the heavyweights of the culture industry directly profit from our stupefaction, getting us hooked on nothing, keeping us out of love and leaving the moribund notion of true beauty as a memory.

So until somebody gives Alfie a good price for his soul and he can start mime wanking his way to the top, he'll try hard to embody truth and lambast greed.

Alfie Brown is funny, as if that were relevant.

He has been performing comedy since the age of 18 and has been good at it since the age of 22. His love of comedy began as a two-year-old when he would gurgle in delight at Alexei Sayle's face, later his comedy, and he spent his formative years obsessed with George Carlin and Bill Hicks. This will be his fourth year at Edinburgh, having previously performed in 2009's youth package show The Lunchtime Club, in 2010 alongside Ivo Graham and last year with his debut hour The Love You Take which received two excellent reviews, one good and one average. He is an alternative comedian obsessed with truth and morality and a hatred of the world's fixation with fame and profit. He has twice appeared on substandard talking head shows on BBC2 and BBC3.