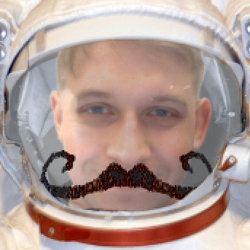 Wanted - hardworking audience of spacefarers to fuel improvised frivolity with anarchic suggestion. Also to clean mysterious monolith defaced with depiction of banana god by mischievous monkey. Apply within, no psychotic computers bent on destruction please. Guffaw as pesky kids pinch the international space station and joyride it down the Royal Mile! Cheer as alien battleships are defeated by the determined application of Frank Zappa records! Do one of those weird breathing-in laughs as the Large Hadron Collider turns out to create the Michael Buble Boson! You're in control of this improvised interstellar spectacular!