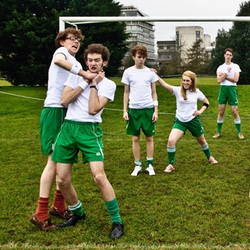 Fire! Regicide! War! Are just some of the hilarious topics covered by the world-famous Oxford Revue's new hour of comedy. The group that first brought you the likes of Michael Palin, Terry Jones, Stewart Lee and Josie Long invites you to see their brand new show. A story of love! Lust! And handholding! We promise it'll be high on laughs and low on angry satire (unless we're satirising it). You'll leave feeling so happy, you'll want to be violently sick (possibly).