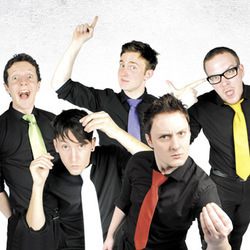 The greatest show on earth is about to begin... at least that's the plan. Immerse yourself in the game-changing new production from the quickest wits in comedy. Unstoppably funny and uniquely talented, The Noise Next Door are the most exciting and captivating act on the circuit today. 'Hilarious ... A superior kind of chaos' **** (Daily Telegraph). 'A comic masterpiece' ***** (Three Weeks). 'No one can fail to be engaged by the vivacious sense of fun' (Chortle).

Following the four-star critical acclaim of their 2010 show, Chaos Control, The Noise Next Door return to the Edinburgh Festival Fringe this year with another dose of white-hot comedy that'll leave you gasping in amazement.

With each show a totally unique comedy experience, audiences return again and again for a dose of The Noise Next Door's unique cutting edge brand of off-the-cuff humour.

This year they are setting out to push the boundaries of instant comedy even further by energising and reinventing improvised comedy formats to their utmost limits.

This is comedy at its purest and instantaneous best.

The Noise Next Door are Charlie Granville, Matt Grant, Tom Houghton, Tom Livingstone and Sam Pacelli. Since 2005, when they first started performing together, they have been astonishing audiences with their own distinctive brand of improvised comedy. With no rehearsal or script between them they have an uncanny knack of transforming audience suggestions into surreally entertaining scenes and songs in the blink of an eye. Their perfect blend of ludicrous characters, witty one-liners, epic stories and musical mayhem have left audiences everywhere in awe of their lightening fast imaginations and totally original comedic talents.

Since they first began performing together they have drawn a loyal fanbase and regularly headline to sell-out audiences at many of the top clubs on the UK Comedy Circuit. They have also supported some of the biggest names in contemporary comedy including Harry Hill, Ed Bryne and Lucy Porter and are the first international group to have performed at FRACAS improvisation festival in Los Angeles.