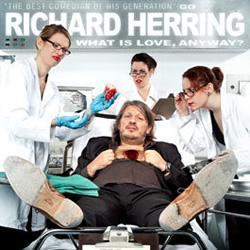 Does anybody love anybody anyway? So asked insane Welsh poet philosopher Howard Jones in 1983. Finally someone dares to answer. Having sorted out religion (Christ on a Bike), politics (Hitler Moustache) and penises (Talking Cock), the star of the award winning podcast As it Occurs to Me and Radio 4's Richard Herring's Objective seeks to define and destroy love. Before love destroys him. Again. Does Richard's dry-cleaner genuinely love him? How could a romantic gesture involving Ferrero Rochers get dangerously out of control? Herring's twentieth Fringe.

So asked the insane, Welsh, poet-philosopher, Howard Jones in 1983, but in the intervening 28 years no one has dared to answer his questions? Until now.

Comedian Richard Herring returns to Edinburgh for his 20th Fringe and 32nd show. Having sorted out religion (Christ on a Bike), politics (Hitler Moustache) and penises (Talking Cock), the star of award-winning podcast As It Occurs To Me and BBC Radio 4's Richard Herring's Objective seeks to define and destroy love. Before love destroys him. Again.

Is love just a chemical reaction in our brains by which our body selects potential sexual partners, or is it a magical force which guides us unerringly to our soul mate, oddly usually waiting until we're off our tits at a night club to do so?

Could a romantic gesture involving Ferrero Rocher chocolates get so out of control as to destroy the economic infrastructure of the United Kingdom?

Is the word being devalued if Richard's dry cleaner claims to "love" all his customers, or is he actually only enamoured with Herring and too shy to tell him directly?

What is Love, Anyway? is a heart-warmingly honest and personal examination of the romantic (and not so romantic) adventures and misadventures of one of the UK's most prolific comedians, as well as a genuine attempt to define this mysterious, debilitating, evil and wondrous emotion.

Richard recently completed his 94 date nationwide tour of his critically acclaimed Edinburgh Fringe show, Christ on a Bike: The Second Coming - including 26 dates at the Leicester Square Theatre. In 2010 Richard published his book How Not To Grow Up and released Hitler Moustache, his acclaimed stand-up show, on DVD. He also recorded the first series of his BBC Radio 4 show Richard Herring's Objective (a second series will air in the autumn).

As one half of the prolific comedy duo Lee & Herring, Richard enjoyed phenomenal cult success as a writer and performer with shows such as Fist of Fun (BBC Two) and This Morning with Richard Not Judy (BBC Two). In recent years he teamed up with Andrew Collins to co-host the Collins and Herring podcast on BBC 6 Music which the Guardian said "paved the way for funny podcasts." Both the Collings and Herrin podcast and his Chortle award winning and Sony award nominated podcast As It Occurs To Me (which gets up to 50,000 downloads per episode) are available to download from www.comedy.co.uk/podcasts and iTunes. Richard will be touring What is Love, Anyway? throughout the UK in Spring 2012.