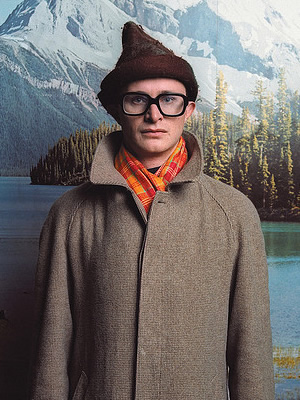 "Jesus!" gasps the woman sitting next to me as Simon Munnery's home-made canopy-like structure leans perilously toward the audience. It is all perfectly safe, of course, and Munnery points out that his expensive insurance policy means he can take out five of us and still have change. It's all going to be fine.

There's a frisson in the room as Munnery begins his performance not on stage but behind us, strumming an electric guitar and singing about the 101ers: the ambitious but doomed crew of a 1929 experimental airship. The titular segment doesn't last long, but it's a riotous start to the show.

Next, Simon erects the above-mentioned canopy over the stage. Seemingly made of kitchen wine racks, the whole thing concertinas spectacularly over and around him. At first, it seems impressively erected with a simple motion; but then there's some fumbling and muttering as Simon tries to attach the safety guy-wire to the ceiling. The canopy flops around and, for a while, we're all genuinely unsure if it's going to collapse into our astonished faces. After being teased by the theatrical prospect of a pop-up set, this engineered anticlimax is hilarious and a perfect view into Simon's messy but beautiful mind. "It took months to make," he says, "Now I've just got to figure out what it's for".

The rest of the show is a boneshaker ride through some of Simon's best recent work: a seedy lecture from a seemingly unaccredited and misogynistic professor of women's studies is a standout moment; and a puppet show about Jesus' neighbours at the Crucifixion is truly an evergreen.

The entire is a patchwork of eccentric ideas, flights of fancy, and bogglingly brilliant aphorisms. There are funny props including another of his trademark mechanical hats, though he's anything but a prop comic: while wearing the outlandish topper, he delivers one-liners and short stories that leave you in puzzled awe over the train of thought that could possibly have lead to them. "My dad is a speaking edition of the Daily Mail. Only extracts though, or we'd rent him out to the blind."

Beautiful, ramshackle and odd, Munnery's new show is a chance window into a rare mind. Go along to see the best of a performer at the top of his game and learn what rhymes with "zeppelins".

Listing for Simon Munnery: Hats Off for the 101ers, and Other Material