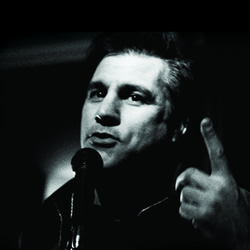 'The superstar of free comics' (Scotsman). New for 2011. The furious, fearless, funny New Yorker. 'Best of the Fest 2010. I can't believe I'm laughing but I am. The comedy world needs Lewis Schaffer. It just doesn't know it yet' *** *(Scotsman). 'One of the five best free comedy shows 2010. Should be a little bit more famous' (List). Malcolm Hardee Award for Comic Originality, Nominee 2010. 'Warning: Unpredictable. Recommended.' (Time Out)

The fast, furious, fearless, and often frantic UK-based New York comic Lewis Schaffer looks forward after 18 years in stand-up and asks himself: Why isn't he famous?

Kate Copstick of The Scotsman called Lewis Schaffer 'the superstar of free comics. I can't believe I'm laughing but I am. An hour whirling in the comedy vortex created by Schaffer's myriad neuroses is always worth the ticket price and here the show is free.' (20 Comedians to Catch at the Edinburgh Festival 2011). The List said Lewis Schaffer had 'one of the best free comedy shows 2010 and should be more famous.' The Evening Standard wrote that he 'definitely has funny bones' which is what British people like (Americans prefer jokes, which he has, too).