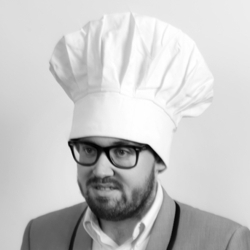 So goodbye. This ship is about to sail. I'm going to die at the end of the festival. I'm off to the big comedy club in the sky. It's time to wish you a farewell and tell you all what I really, really think of you. Join me for dinner, dress smart and bring a bottle (preferably Blue Nun. Pat loves that). 'As mad as a balloon on holiday' (The Fix).

John Kearns is ill. Very ill. In fact, he's dieing. This is not a marketing gimmick. The doctor has given him between six months and ten years to live.

John had a choice. He could retreat from society, spend his last months at home surrounded by friends and family or he could invite them to a dinner party taking place every day in Edinburgh. You know, so we can all reminisce.

The flat is booked, the Soho Theatre has been told to put a slot on ice for him before Christmas and John's whacked the oven to gas mark 4. He's invited friends, family and most importantly you to spend his last remaining days on earth with him doing what he loves most.

Please note the show will not go on if John dies during the run.

John Kearns is a stand-up, writer, actor and radio presenter. He gigs regularly on the London stand-up circuit. Alongside keeping a regular blog he also hosts an agony aunt section on Greg James' afternoon show on BBC Radio 1 every Thursday. John has also been selected to appear at the prestigious Lunchtime Club one of the best comedy showcase shows at the Edinburgh festival. He should be dead by Christmas.