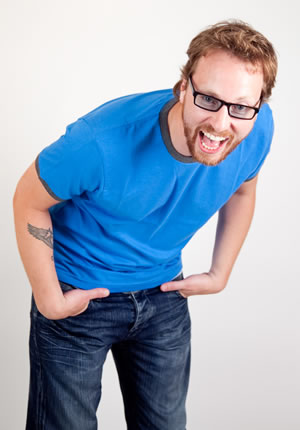 They say there is a downward spiral, they say there are five steps to recovering from heartbreak, they say a lot of things, but one thing they can definitely say is that award-winning Canadian comic Jason John Whitehead has returned with another uncompromising stand-up show.

The past year has really sucked for JJ, trapped by a volcanic ash cloud that somehow led to the end of his thus-far pretty near perfect five year relationship, he's had a year to look back, take stock and wonder what the hell happened. Some people get therapy, comics turn their misery into entertainment. Drunk, bitter, newly single, depressed, high, lost; Jay wrote what has turned out to be the most personal, compelling and funny show of his career.

How did your new show come about?

Well, I went through a break-up and sure enough, six months later, I realised there was a definite theme to what I was writing.

So how does it feel baring yourself to a group of strangers every night?

I'd rather play to strangers than to people I know really well. This way, if things go wrong, then I can still be sure my friends won't be harassing me about it.

What's been your worst heckle? And how did you deal with it?

All heckles are pretty bad. I guess the worst ones are from people who are just too drunk to shut up.

You can check out a 'Jason John Whitehead vs. a Heckler' clip here - she just wouldn't shut up.

What makes the bad audiences and experiences worthwhile?

I guess it's always the desire that gets created within you to bounce back after you have a rough gig or a bad audience. The 'next' gig is usually one of overwhelming focus and fantastic timing.

I never know what to say to these questions. As an artist and a fan of stand-up comedy, I try to take in as many shows as possible. Here we all are, crammed into Edinburgh for the month, enjoying the fruits of our labour and carrying on with friends before we hit the road again in September. It's a story in itself, isn't it?

Any tips on how to survive the festival?

Two pairs of shoes and waterproof stuff... oh, and lots of optimism.

Who would you recommend seeing this year?

There's always a long list, but I love recommending my flatmates for the month. I'm living with fellow Canadian Phil Nichol, who won the Perrier a few years ago. Englishman Matt Kirshen always puts on a great show and my final flat mate is visiting American Lee Camp, who is doing his debut show here at the festival.

What's next after Edinburgh?

Well there are a few other interesting destinations booked in. I'll be playing at Camp Bestival, the festival on the Isle of Wight in September, as well as heading to Malta to do a couple of shows for the first time.

Maybe I'll just have to keep my suitcase packed after I leave Edinburgh.

'Jason John Whitehead: Letters From Mindy' is on at the Underbelly Diary Room, Underbelly's Pasture, at 10:25pm every day. Listing