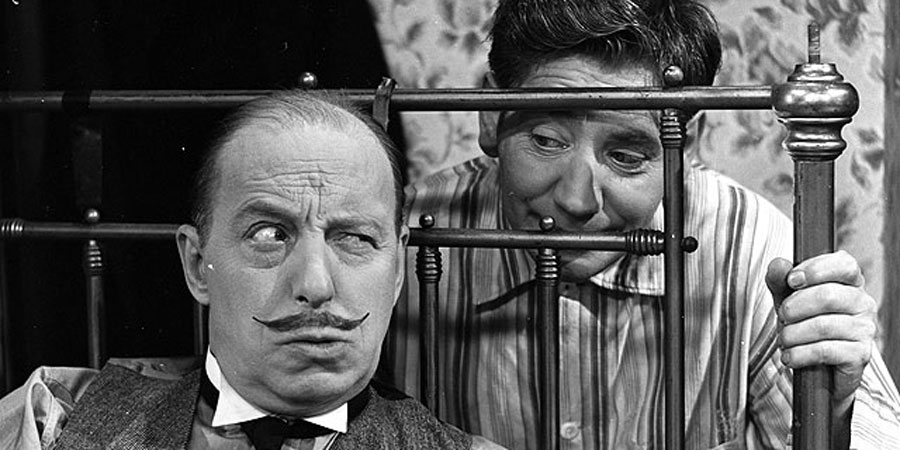 However, started the box-set tonight, and was pleased to see the first episode "Civvy Street "segued nicely as they showed the two of them in The Army Game uniforms, being demobbed - so it was sort of a continuation of that series. So often the first few episodes are missing, but not here it seems.

Thoroughly enjoyed it with lots of laughs, and odd to see Clive Dunn playing someone even older than Jonesy from DA, with some of the mannerism from that classic. Almost, for example, a "they don't like it up 'em" when Dunn mistook Bill for Lord Kitchener.

Looking forward very much to watching the whole series.

My dad nearly ran Ted Lune over on Blackpool prom when we were on holiday up there in the late 50's.

Those dodgems can be dangerous if you get out of them while they're still going..

Watched the second episode, and it just gets better! So very funny with a just about recognisable Sheila Hancock who was hilarious.

Bill Fraser and Alfie Bass are brilliant together.

**EDIT Forgot to mention that Clive Dunn, who goes off on one when he thinks tashed Bill Fraser is Earl Kitchener, talked about the Fuzzy Wuzzies a la Dad's Army. So now we know where he got that from.

There's quite a lot about the writing of Bootsie and Snudge in Robert Ross's biography of Marty Feldman.

There's quite a lot about the writing of Bootsie and Snudge in Robert Ross's biography of Marty Feldman.

Yes, he seemed to have shared the writing with Barry Took, as it has been noticeable the almost alternate writers of each episode, but I expect they did confer on a number of them.

Barry was a very talented chap.I liked his TV presenting too.

Barry was a very talented chap.I liked his TV presenting too.

And often confused with the late great Barry Cryer, by all accounts.

Just finished disc/series 3 and am really loving these - Bill Fraser and Alfie Bass are a great team, and there's the Jonesy clone, played by Clive Dunn, who is also very funny.

I am really enjoying this box-set and are savouring each episode, especially tonight's "Morning Surgery", which was made all the more enjoyable by the inclusion of Patricia Hayes and a recognisable by her voice, Pat Coombs (hadn't developed her gormless look yet) as two gossips.

Alfie Bass is simply brilliant and Bill Fraser a perfect foil, all topped off with Clive Dunn's "Jonesy"

Write to Network and petition for a release of all four.

Well, that's decent of you Aaron, as you've got more clout than me - let me know how you get on. 😁

No joy Aaron, as you can see - would you have any sway?

Thanks for your email

Seriously never seen this as it's before my time.

Seriously never seen this as it's before my time.

Or The Army Game, which it was a spin off from?

I love it! Two very fine comic actors with "Jonesy" for good company.