Toys and books, three channel TV and the Saturday Matinee at the cinema were pretty much all kids had for entertainment and I still thought it was pretty damn good.

I understand your post, of course, and you make a great deal of sense.

I would, however, like to add to what you say by asking younger BCG readers to spare a thought for a generation of kids for whom three-channel TV (had it existed) would have been the equivalent of Netflix!

The Beano, Dandy, Topper and Beazer were like rays of brilliant light shining into what was generally a rather dismal and uninspiring world.

You must have had high expectations or been one of these kids whose parents had brought you up on/forced you to read Enid Blyton and by the age of ten had read half of Dickens' stuff. There were kids in my class like that. For us lesser kids comics were the gateway to literacy. And put into the context of the times, no computers or playstations, no mobiles or social media, no videos then even. Toys and books, three channel TV and the Saturday Matinee at the cinema were pretty much all kids had for entertainment and I still thought it was pretty damn good.

Comics were looked forward to and kept us quiet for ages, there were strips you didn't read, some you read but were rated average, but your favourites were read and re-read. All the above comics listed were read by the Donalds because so many of their strips were converted into naughtier ones for Viz. I'd guess The Beezer and Buster were the most plundered without looking into it. Gilbert Ratchet, Tin Ribs, Arseache, Major Misunderstanding, Oliver's Army, Spoilt Bastard and others I can't think of right now were reworkings of strips from those two great comics.

I don't think a parent can force a child to read any book. Mine certainly never forced any books on me, as they surely knew that would discourage me from reading. I simply went to the school library to find books (Tintin, Asterix and more). I grew up in places where there was one TV channel or no TV channels, let alone a bloody local cinema. Toys? I played the piano and played sport. Thank Christ the local newsagent did not stock the Beano or the Dandy. Instead, it had Disney comics (the Duck stories by Carl Barks were instantly recognizable). Also, there were some Aussie reprints of humorous DC comics (Fox and Crow, Flippity and Flop). On holidays or when visiting other kids' houses, I would occasionally encounter a Beano or Dandy or Whizzer and Chips and marvel at how dreadfully unfunny they were. The schoolmasters always wearing mortarboards and pince-nez. The obnoxious, self-centered child characters. The bloody banal one-liners and punchlines, and spelling out stuff like "chortle". They weren't remotely educational or interesting. They made England and British schools look like hell. The Goodies did a nice spoof of such stuff in one of their books. Later, I discovered Mad magazine, then Viz came along. Yes, the Donald brothers rightly took the piss out of all the mainstream British shite comics.

BBC 1, BBC 2, ITV - 3 channels.
I would have to add though that there was a lot of great stuff for kids on them, great Hannah Barbara cartoons, Tom & Jerry, then all those very British tea time shows that tried to culturally improve kids.

On holidays or when visiting other kids' houses, I would occasionally encounter a Beano or Dandy or Whizzer and Chips and marvel at how dreadfully unfunny they were. The schoolmasters always wearing mortarboards and pince-nez. The obnoxious, self-centered child characters. The bloody banal one-liners and punchlines, and spelling out stuff like "chortle". They made England and British schools look like hell.

That's what I loved about them.

I Yes, the Donald brothers rightly took the piss out of all the mainstream British shite comics.

Conversely again, it came across to me that they did it with a real love of the originals.

The Beano, Dandy, Topper and Beazer were like rays of brilliant light shining into what was generally a rather dismal and uninspiring world.

That's my view too but I'll add the cartoons on TV, Laurel & Hardy which was shown a lot, and Kenneth's Asterix and TinTin which were very well written and must have been educational.

Something else I've noticed with Viz is how spelling and grammar errors happen in every issue. It ruins the comic effect when I see a typo.

I wish I had kept Beano stuff for the memories instead of selling or chucking it all. Things like sticker books and I had hundreds of the mini comic library issues. I had the first issue of the comic library but sold it at a carboot. They didn't launch the comic library until the 80s so it wasn't like having the first issue of the comic but still regret selling it. I was going through puberty and priorities changed so it was time to ring out the old. No time for comics now I've discovered girls and smoking.

I had one TV station when I was young. We couldn't get ITV and BBC2 hadn't been invented,

Can anyone suggest a good annual from previous years please? My tastes would be for more Sid the Sexist and less Fat Slags more Modern Parents than Eight Ace. Not from 2001 - 2007 as I kept those issues. So pre 2000 really. The Big Sausage gets a good rating online, is that a good one?

I picked up a Worzel Gummidge Annual recently. It wasn't amazing, but it was quite an easy read, apart from the stuff in Worzelese. Not fat slags therein, just Aunt Sally and the Saucy Nancy and Connie Booth as a rival Aunt Sally.

New issue of Viz has a spoof Carry On movie poster based on Pulp Fiction. It should be funny, but it isn't. Not least because Pulp Fiction is not exactly fresh at 25 yrs old and the character crossovers are ill-conceived. 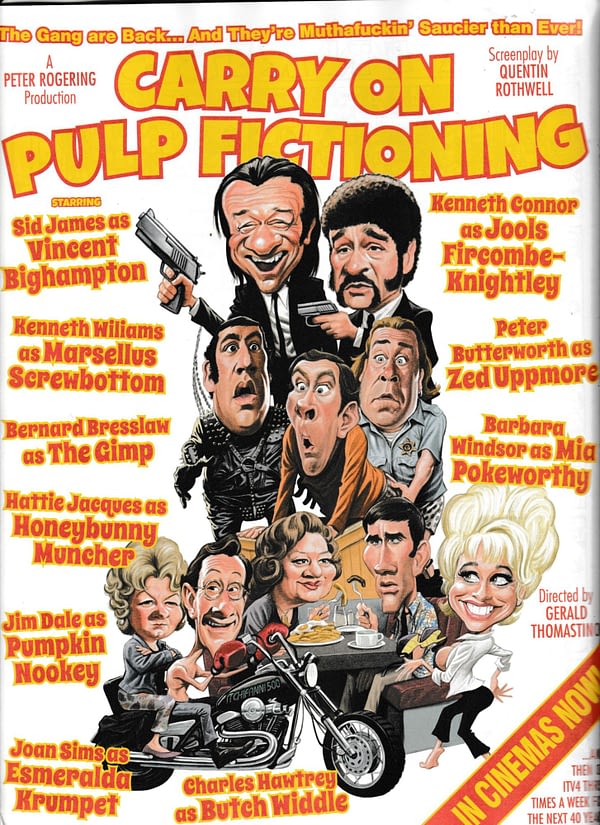 Haven't bought Viz for several months and don't even flick through them in the shop. Just not funny anymore and probably not long now before it becomes online only.

I used to read the Beano and the Dandy every week when they cost 2d per copy rather than today's Beano price of £2.75 per copy. It's difficult to believe that in those early days, you could buy almost 1000 copies of the Beano for the price of just three copies today.

The Dandy is now defunct but the Beano soldiers on and needs to charge more today because, in the early days, its circulation was around 2 million copies per week as opposed to around 30,000 currently.

The Beano was absolutely brilliant and the Dandy, although not as good (in my view) was still pretty good.

It's entirely likely that both comics plummeted downhill in every way as time went by, just as it's entirely likely that the once-sensational Viz has gone downhill in recent times. Be that as it may, however, at its peak the Beano was top-notch and easily the best comic in Britain. The Dandy was second best and leagues ahead of whatever might have been in third place.

£2.75???? Is that right? Horrifying. Please tell me Biffo the Bear is still on the front page.

Please tell me Biffo the Bear is still on the front page.

In 1999, Biffo sauntered out of the Beano offices to conduct a little personal business in the nearby woods and never returned.

I saw a copy of the Beano recently and the front page was dedicated to Dennis the Menace.

A friend of mine used to be the president of the Dennis the Menace fan club: he was also a journalist on the Sunday Sport.

Dennis was all right but NOBODY can beat Biffo.

Very expensive and the glossy printing and freebies will be adding to the retail price. I remember when the Beano only occasionally had an extra with it like book of stickers or some plastic contraption which would be glued to it but these days the whole comic is wrapped in plastic. The production cost must be very high because they seem to be giving away a freebee every issue. I remember when I joined the Beano fanclub and got my members pack in the post in the mid 80s. I was ecstatic. I learned the closely guarded 'Dennis Pose' like it was part of a secret society.

Printed material in general is at risk because of the reduced costs of switching to online only. It's only a matter of time before newspapers stop printing but with the state of the media and pressure from environment groups that's no bad thing.

Have just told Mr. B the price of the Beano and he's horrified. And we both remember when the Beano and the Dandy came out on alternative weeks.