Play the 'Up There' game 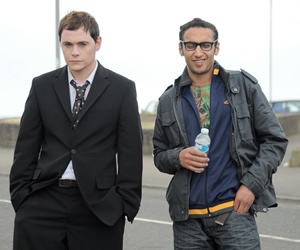 Death and taxes. The two things none of us can avoid, as the saying goes. If you have Jimmy Carr's accountant you might have some joy with the taxes, but there's no escaping the other one. And in the spirit of making light of death, there's now Up There. It's a new British indie comedy set in the afterlife: if you thought life was bad, get a load of death!

The film focuses on the 'life' of Martin - a deceased man who is stuck in a dead-end job - he has to welcome the newly departed into the afterlife (a bit like Death himself, but without any powers or a scythe). Martin dreams of going 'Up There' too, but his plans are thrown into disarray when, after teaming up with the relentlessly chirpy Rash, a new 'arrival' is lost.

The film is written and directed by award-winning filmmaker Zam Salim, and based on his very successful short Laid Off which won awards at festivals around the world and became a minor YouTube sensation.

Here's the trailer for Up There. It gives a good sense of what the film is like:

In a neat bit of promotion, the makers of the film are asking fans of British comedy movies to take part in an online game, in which they submit what they would have written on their headstone. There's various prizes on offer, including the chance to have the UK premiere at your local cinema.

To take part, visit www.uptherethegame.co.uk, click 'Enter', register or login via Facebook, and in 250 characters or less, tell them what you'd have written on your gravestone. 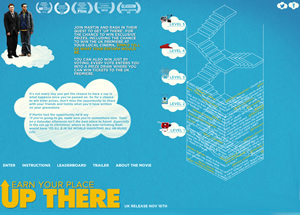 Entries so far include:

"Could do a nice crop of pumpkins here."

"Here Lies Martin: The lame-o who couldn't even come up with a good epitaph."

Think you could do better? Log on and submit your own now.

Up There will be released in the UK on November 16th 2012. To demand the film in your local area, or book a ticket for a cinema screening that is already scheduled, click on the blue CINEMAS arrow in the trailer above.

At the moment it looks like the London area might claim the premiere, but if other parts of the UK put in a concerted effort that could soon change. At the time of writing Birmingham, Glasgow, York and Cardiff are close behind. Submitting a epitaph, sharing the trailer, telling a friend and liking the film's Facebook page all help gain points for the area you live in.

Spring into action now - the winning cinema will be announced next week.