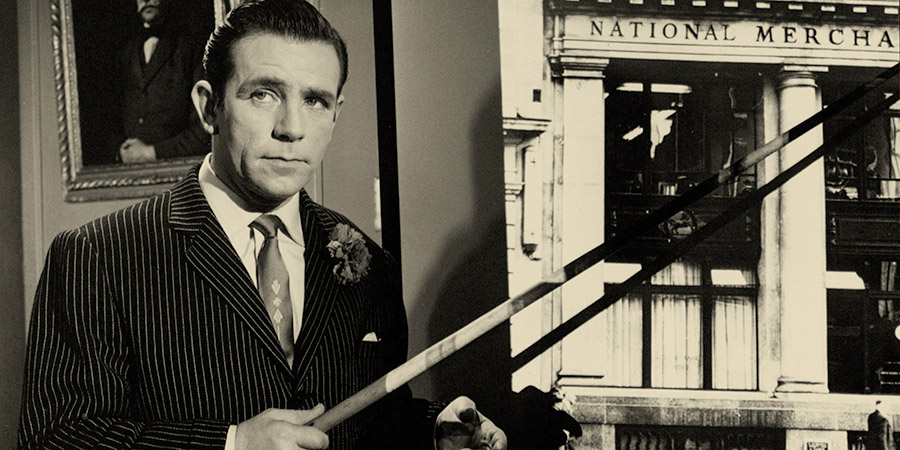 There Was A Crooked Man

Former commando and explosives expert Davy Cooper is down on his luck: unemployed, he's struggling for food, never mind a warm, dry place to sleep. A chance encounter on a torrential Soho evening with a former army buddy, 'Flash' Dan, looks set to change all that.

Dan's plan, however, isn't entirely up Davy's street. He's a dab-hand at exploding things, but Cooper is an honest man - he's never tried a safe or bank vault before! That, unfortunately, is exactly what Flash Dan's gang, lead by the rather persuasive Adolf Carter, has in mind.

After a string of successful raids, the team embark on their most ambitious ploy yet: tunnelling from a hospital's operating theatre into a bank vault next door. It's the end of the road for poor Davy though, as the rest of the gang - at a safe distance inside the hospital - hear and flee from the approaching police, whilst he is caught red-handed with his explosives and loot.

Sentenced to seven years, Cooper gets down to his new incarcerated position and grows to love his place in the prison. He has a number of pleasant jobs, including tending the governor's garden, enjoys the cosiness of his cell, and relishes having no worries or cares about money, food, or the roof over his head. He is aghast, then, when he is told he is to be released two years early, on account of his good behaviour. After much protestation and pleading, Davy leaves Her Majesty's residence and heads to the seaside town of Sleath, where the prison chaplain has arranged a factory job for him.

Arriving in Sleath, Davy finds a quiet, dreary town. The first man he meets - the railway station master - appears to be the town's only resident not employed by bigwig, mayor, businessman and Davy's own new boss, Mr McKillup. The start and end of Sleath, he is on the surface a kind, thoughtful man, but is in fact slowly bleeding the town dry. In his new position at McKillup's factory, Davy discovers his boss's plans to swindle the entire populace out of their life savings by selling crooked shares in a local regeneration company. When Davy tries to warn people of the plot, McKillup frames him for attempted robbery and Davy has no choice but to escape, promising to return and have his revenge.

Reuniting with Adolf, Dan, and the rest of his criminal chums, they plot their most audacious stunt yet: to rob McKillup of every penny he has, blow up Sleath, and leave the townspeople with enough money to move on and set up a new town somewhere else. This is one con trick that looks set to end, quite literally, with a bang.