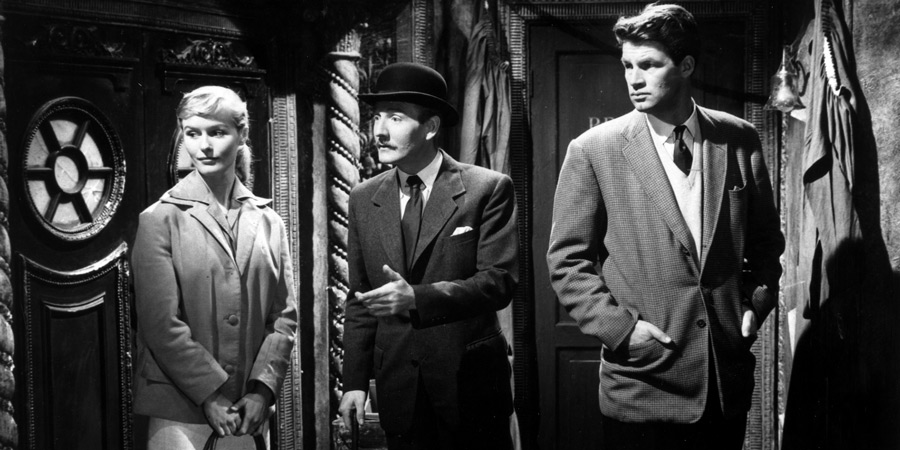 The Smallest Show On Earth

Matt Spenser and his wife, Jean, are shocked when he receives a letter informing him he is the sole beneficiary of his late, great-uncle Simon Spenser's estate: he didn't even know he had a great-uncle Simon!

Phoning the solicitor to protest their certain mistake, Matt is informed that he most certainly did have such a relative, and that his estate includes a cinema. Bewildered but excited, the pair set out at once for Simon's home town of Sloughborough, Worts.

After a suspenseful train ride, dreaming of their monied future as proprietors of a blooming picture palace, the Spensers arrive in Sloughborough and are delighted to come across the Grand, which their taxi driver assures them is the only cinema in the town. A huge, gleaming art-deco venue with commissionaires at the door and queues outside, it's all they could have dreamed of.

Meeting with solicitor Robin Carter, however, the pair find a shock awaits. Matt's inheritance is not, in fact, the Grand, but a small, run-down and indeed currently closed-down venue known locally as 'The Flea Pit'. Sandwiched between two busy railway viaducts is The Bijou Kinema, appearing somewhere between half and completely derelict, complete with a doddering staff of three: alcoholic projectionist Mr. Quill, who's easily as ancient as his equipment; flustered house manager Mrs. Fazackalee; and Old Tom, usher and would-be commissionaire, who's as old again as Mr. Quill is.

As the Spensers begin to get their heads around their new circumstances, Carter informs them that Simon had latterly received an offer of £5,000 from Grand proprietor Mr. Hardcastle to purchase the establishment - not to run as a cinema, or indeed restore to use as a theatre or music hall, but to demolish and use its footprint as entrance way to a large new car park that his own premises, just around the corner, desperately requires.

Hardcastle seems amenable enough at first, but it soon becomes apparent that he is now only willing to offer a fraction of the worth of the property: indeed, only enough to cover the debts of Simon's estate. Under Carter's guidance, however, the Spensers resolve to begin works to refurbish and reopen the Bijou, and strong-arming their rival into upping his offer in process. It's a tricky scheme, but with thousands of pounds at stake, one well worth playing!