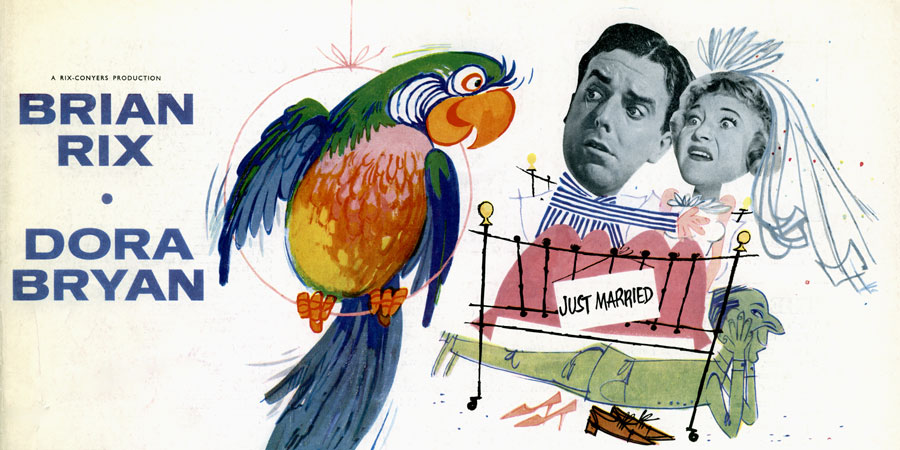 The Night We Got The Bird

It's a set-up of craft and graft. 'Chippendale Charlie' forges the antiques. Cecil Gibson flogs 'em. There's only one flaw in the fiddle: they've no-one to carry the can if things go wrong. Until Bertie Skidmore joins the firm...

Bertie's the perfect idiot. He's so gormless that when he discovers he's sold a fake antique he rushes after the customer, Wolfie Green, to confess. Cecil is horrified, jumps into the van alongside Bertie, grabs the steering-wheel - and crunches into a steam-roller.

They give Cecil a beautiful send-off. Dignified service, flowers from his friends, weeping from his widow, Julie. At the funeral, she meets Bertie and the pair fall in love. The business prospers honestly, and soon the two are married.

It might have been a deliriously happy honeymoon. But a beady-eyed parrot - a wedding gift from an anonymous well-wisher - pole-axes Bertie by speaking to him during the reception. In the late Cecil's voice!

Bertie's amazed - and horrified. His behaviour produces raised eyebrows from Julie's family, and an ultimatum from the doctor. It's bed for Bertie and a wedding night alone for poor Julie! The skids are under Bertie. His new in-laws think he's mad. The honeymoon is off. The flaming parrot, he decides, will have to go.

The decision is easy. Achievement difficult. Until Bertie tangles with the law, and Mr. Warre-Monger, J.P., dispatches the parrot to the RSPCA. But there's still no honeymoon prospect for Bertie yet, because Wolfie Green has discovered he's been returned a fake substitute for the antique four-poster he sent in to Cecil for restoration. Furthermore, he's unwittingly sold the fake on - to Mr. Warre-Monger!

The only hope for Bertie is to rescue the original bed from its new owner - the headmistress of a girls' school, he eventually discovers - and switch it with Mr. Warre-Monger's. For Bertie it's a nightmare operation!

In the meantime, what's happened to the parrot? Among the objects orbiting in space is one that doesn't give out the familiar "bleep-bleep", just a raucous screech.

But Bertie's not squawking - he's off on his honeymoon!