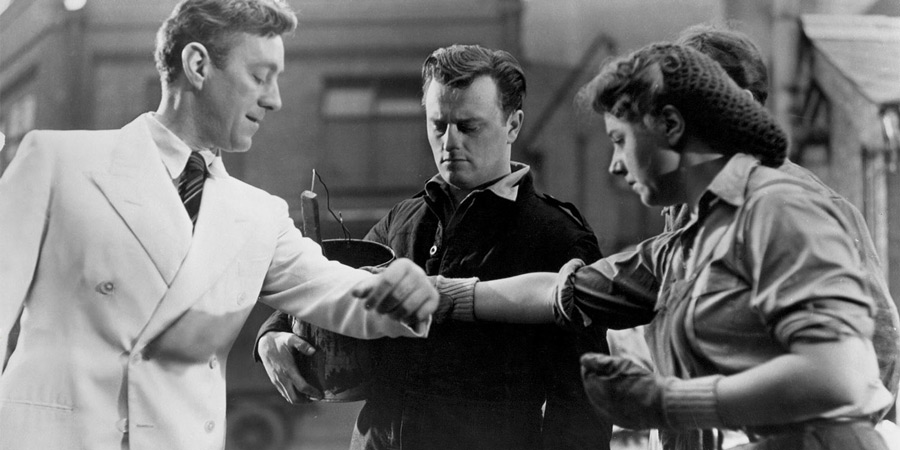 The Man In The White Suit

Classic Ealing comedy starring Alec Guinness. Sidney Stratton invents a fibre that never gets dirty and never wears out, but it causes him problems

Sidney Stratton is a Cambridge-educated scientist working at a textile mill: seemingly considered an eccentric however, he is only able to find work in a lowly maintenance role. He has, never the less, managed to set up his own spot in the factory's development lab amidst a myriad of official projects, where he surreptitiously works to refine a new fibre.

Facing resignation or the sack after his illicit experiment is discovered by his superiors, he leaves for the North and another major mill with a development department, Birnley. Initially facing a similar lack of formal access to the labs, he manages to find voluntary work helping the scientists after exhibiting his own wealth of knowledge - and is rewarded with officially recognised space to use in his own time.

After much hard work, facing various further hiccups, finally convincing Mr. Birnley and his board - plus not before spending a large amount of the mill's money and causing several explosions - Stratton finally perfects the manufacture of his fibre.

The brilliant-white new material has astonishing properties: it repels dirt, never wears out, and cannot be ripped, cut or torn. Birnley sees the business potential in this, but when rumour of the project reaches his competitors they convene a delegation and swoop upon the Birnley mill. They realise that, never wearing out, only a limited amount of the fibre will ever need to be made, putting all other companies, and eventually Birnley itself, out of business.

Meanwhile, the Birnley workers have also heard about Sidney's discovery and have come to the exact same conclusion. Socialists and capitalists alike join forces in order to stop Stratton's invention reaching the attention of the public, but the man in the white suit is not going to be stopped easily.