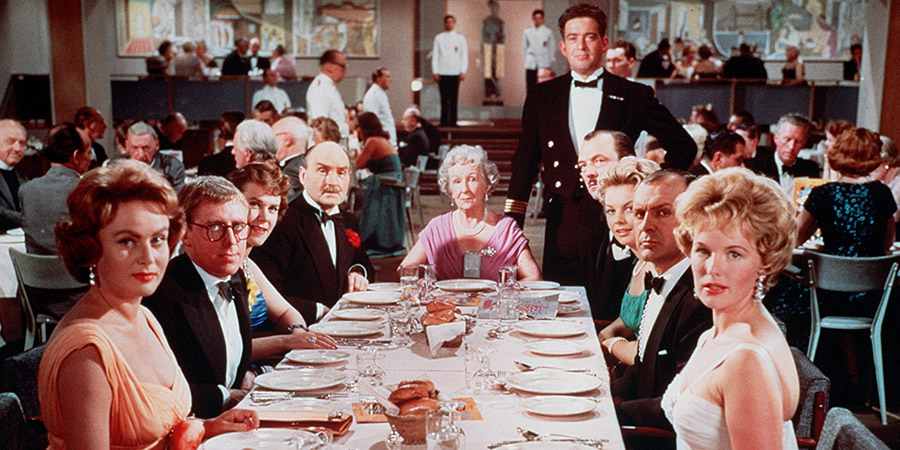 Captain Ebbs has finally been given command of a luxury liner. Unfortunately for him, he has a First Officer more concerned with women

After years piloting ships on lucrative but relatively low-status cargo routes, the illness of a colleague sees Albert Ebbs promoted by his company to captain one of their luxurious cruise liners, the S.S. Queen Adelaide, sailing from England to Australia. Initially excited by this glamorous step-up in the world, Ebbs is, however, soon feeling a little out of his depth: from the structured way in which elements of ship life are controlled afar from head office; the expectations of him whilst at sea; and the somewhat over-comfortable nature of a chunk of his crew. But most of all, the unpredictable and demanding passengers!

Although ably assisted by his personal steward Burtweed, Captain Ebbs quickly discovers his First Officer is far more concerned with womanising than running the ship, whilst failing to notice that his Chief Purser is leading a roaring trade in smuggling supplies! To make matters worse, one particularly obnoxious passenger - the pompous Major Broster - reveals himself to be a large shareholder in the line and personal friend of managing director Sir Angus.

Daunted by the range of duties expected of him, from beauty contests to dances and, of course, hosting at the dining room's top table, the Captain never the less attempts to rise to the occasion, but sadly makes a number of stumbles and ends up flat on his face - literally! Other passengers include the Cokes, a well-meaning but rowdy Australian couple; pretty widow Mrs. Judd; a Canon who wishes to be as far from other members of the cloth as possible; and Mrs. Porteous, a ravishing and very forthcoming woman who sees more than a possibility of romance with poor Albert.

Ebbs's lot continues in much the same manner as their lengthy journey continues. Stopping to refuel, he breaks the habit of a lifetime by imbibing a little too much with his Chief Engineer, Earnshaw, with whom he previously sailed for the company and maintains a strong, if usually unspoken, understanding with. Sharing their troubles, the old friends and colleagues get drunker and drunker. Later that evening, when Mrs. Judd finds him roaming the corridors in a decidedly fuddled condition, it takes all her tact to tuck him safely away in his cabin and a headache draft.

Having narrowly avoided widespread embarrassment at his state, the following day's fancy dress dance brings matters on board to a head when the cantankerous Major realises the passengers are being sold cider as champagne (one of the Purser's many schemes) and accuses the Captain of being behind the swindle. The two men soon come to blows and Albert fears his time with the line must now surely be up - until Mrs. Porteous and Mrs. Judd step in to lend a hand and put Borster back in his place...