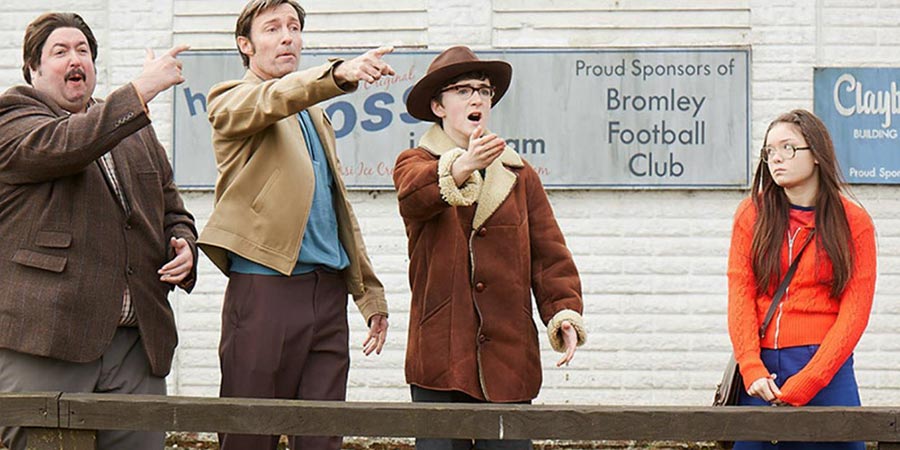 Film about a boy, a girl, and the worst football team in Britain

You can't choose who you fall in love with and that's especially true with football teams.

In 1969, as England were preparing for the defence of their World Cup crown, and George Best was delighting crowds with his virtuoso skills, 14 year old David Roberts became infatuated with the team at the very opposite end of the football spectrum - his non-league club Bromley FC. Bromley were a team who had seen better days: crowds had dwindled to less than a hundred, players were turning up late, if at all, and the team were letting in so many goals that the taunting opposition fans often lost count of the score.

David Roberts is a loner in love with football. Finding it hard to fit in at school he longs to be ingratiated into the inner sanctum of Bromley FC's fans. These fans include Derek, Roy and Peter, three misfits with less influence at the club than they imagine. A chance meeting at a local cafe means David is welcomed in to the fold but there's a catch... he must lead the way in forcing current team manager Dick Ellis out. While enforcing a bungled one man protest David meets Ruby, the daughter of terrifying club Chairman Charlie King.

The awful season continues being lit up by brief moments of quality. One such event is a great performance by David's goalkeeping hero Alan Soper. His performance sparks wild celebrations, mainly from David, who follows Soper from the pitch and into the main stand. While there David enters the Chairman's office where he sees a mysterious note clipped to a file. The note seems to indicate a huge offer from Manchester United for the team's star player...? Before David can find out more he is interrupted by the Chairman's daughter, and child genius, Ruby... a girl who now appears besotted with David.

What follows are a catalogue of attempts by David and his new friends to find out what's going on at their beloved and astoundingly awful Bromley FC.

In the meantime David is sent to boarding school and subsequently expelled, starts at a comprehensive school and embarks on a seemingly sham relationship with the Chairman's daughter in order to infiltrate the club. A relationship that will lead him to a party at the Chairman's house where David has a terrible realisation... The note he saw was not all it seemed!

The final act then follows David and his new relationship with the once fearsome Chairman as the pair plot to dig themselves out of the trouble the mysterious note has caused. We also discover that David's feelings towards Ruby are beginning to challenge his devotion to his beloved football club. The film reaches its nerve wracking finale with the team needing to win its last game. All square with a minute to go Bromley are awarded a penalty.

Will it be scored, and will David get the girl?

The Bromley Boys is a touching coming of age film played to the backdrop of the music, sights and sounds of late 60s Britain.