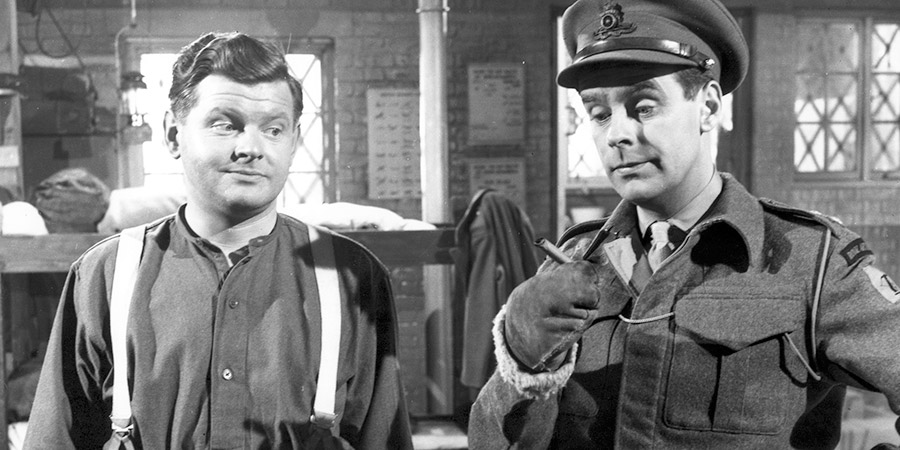 Light Up The Sky!

It is the early 1940s, and a small cricket field somewhere in southern England has been requisitioned by the army for placement of an anti-aircraft searchlight squadron, with the modest pavilion turned into their quarters.

Lead by 'Tommo' Tomlinson - and in turn overseen by well-spoken regional commander Lieutenant Ogelby - the small but tightly-knit group takes a relaxed attitude to rules and expected army behaviour. Their number includes brothers Eric and Syd McCaffey, who are a small-time comedy double-act working variety theatres at every opportunity; cook Roland Kenyon, who dreams of training to become a proper chef; and Ted Green, whose own young son is serving in the Mediterranean.

Tensions are raised amongst the squadron when Eric returns from a short period of leave and announces his marriage - the first Syd has heard of it! Tomlinson himself is waiting to get married, whilst 'Smithy' Smith is pining for a sweetheart whom he fears will marry another man. Tommo's also under pressure from his fiancée, who's been promoted above him: his masculine pride can't take the boys' mocking! But they should be careful, as promotion would require a crack-down in discipline.

Between the Nazis' irregular air raids, the group engage in a series of underhand escapades amidst the nearby villages, but it's Eric's dalliance with a local farmer's daughter that could really set the cat amongst the pigeons!