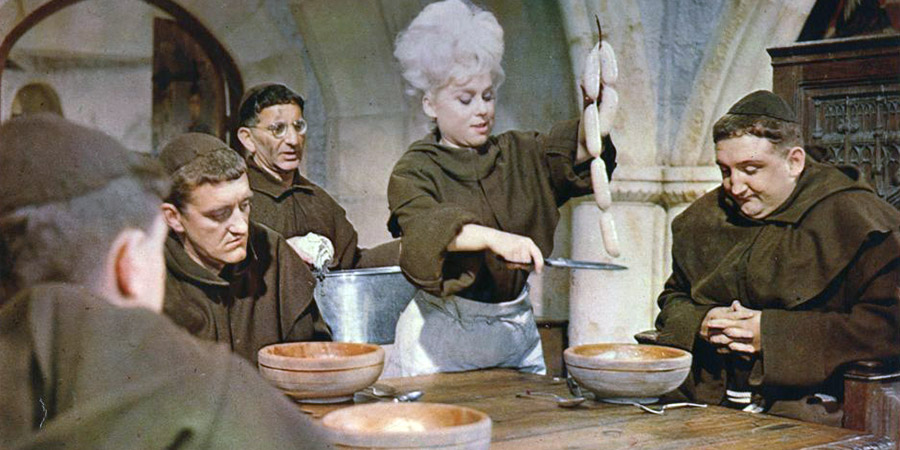 With Met Police Superintendent Mungo having recently jailed a rival mob and now quickly closing in on them, a group of London thieves organise to retreat to a rural monastery, on an island just off the Cornish coast, in order to lie low.

Lead by Walt (ably assisted by his girlfriend and fellow crook, Bikini), the gang - also comprising Specs, Lorenzo, Squirts and Willy - are initially aghast at having to go quite so back-to-the-land. Milking cows is a far cry from supping whisky in Soho's finest clubs. None of them is more aghast than Bikini, who's assigned lead kitchen duties, despite never having done more than toasted a slice of bread!

Their initial endeavours are predictably disastrous. 'Interesting' sausages; failed crops; and face-fulls of mud whilst tending to the pigs are not uncommon, but with the help of a couple of books acquired from the mainland, their endeavours slowly begin to improve.

In the cellars, meanwhile, a highly efficient operation has been set-up: repurposing expensive furs into unrecognisable new garments, melting down and remaking 'antiques', forging bank notes, and reworking jewellery amongst them. Befriending Phineas, an wily old fisherman from the nearest mainland village, proves an invaluable asset to the team, and they're soon storing up a healthy amount of cash to 'retire' on.

However, having overcome a range of setbacks and close calls, the group soon find themselves rather enjoying their new surroundings, and the lifestyle that has come with it. When the time comes, will they be able to leave the island, and what might be waiting for them back in London?