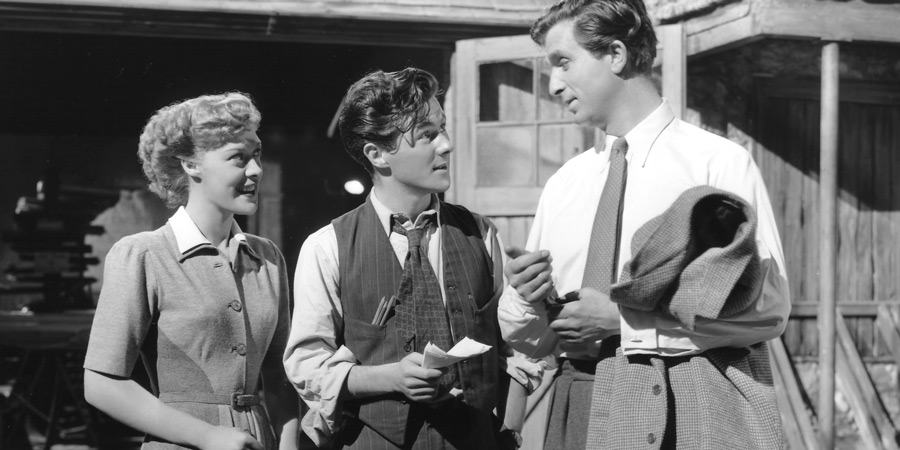 All Over The Town

Returning to his seaside home town of Tormouth and pre-war job as a newspaper reporter after six years in the RAF, Nathaniel 'Nat' Hearn finds a new vigour in his journalism. Tired of the same-old fawning and unchallenging reports of local life, he makes a stand - much to founding editor Sam Vane's rage.

Ably assisting Nat is Sally; she longs to leave for London, but he convinces her to stay as his assistant, update him on the last six years of developments in the town, and assist in his reporting. It's not long before a romance develops between the pair.

In a shocking twist of fate, however, Sam meets an unexpected and sudden death when he suffers a heart attack. With a poor record of investments, he has no money to leave his family and so they offer Nat, their star reporter, a partnership in the firm and the editor's role. Seeing the opportunity to turn the Clarion into the truthful, honest - even campaigning - newspaper that he longs it to be, Nat gives little thought before accepting. Angered at the thought that Nathaniel's chosen the small town over her and her wish to leave, Sally breaks off their relationship.

Meanwhile, local businessman and councillor, Mr Baines, is spearheading a drastic project to redevelop the harbour, including the demolition of a number of residential properties and the construction of a new council housing development further up the cliffs, outside the existing town. Many of the harbour's residents are elderly and not keen to be moved at all, nevermind from the centre of Tormouth to a new development on the outskirts, and their upset grabs Nathaniel's attention.

As he begins printing forthright pieces challenging the accepted orthodoxy, the council, and a number of other locals, the Clarion begins to feel the financial strain when they pull advertisements and cancel subscriptions. Nat is adamant he is on the right course and, in the long term, will only increase the paper's readership, but the Vane family disagree and the paper's publication is brought to a halt.

Investigating the harbour redevelopment and housing scheme further, Nat realises that the whole plan - and the council - is mired in corruption. A previous proposal that would have seen new housing just feet from the present buildings has been hushed up with no good reason, whilst Baines seems key to profit financially from the plan that's being pushed through: it appears he wants to turn the seafront into a tourist trap with entertainments under his business empire.

As Baines tries to manoeuvre the town into supporting his plan for the harbour, and compel both the Vane family and the paper's other staff to unite against Nat, it's a race against time for him to get the paper out, exposing the earlier redevelopment proposals and the corruption on the council. With almost no staff, a broken printing press and no money, it's a fight he could very easily lose.