David Tennant and Michael Sheen introduce us to Staged, the BBC One comedy they filmed during lockdown...

David, Michael, what can you tell us about the show?

Michael: What can I tell you about the show? Well, it's about two young, plucky, upcoming actors David and Michael. We play ourselves - David Tennant and myself - we're the best casting for it. The premise is that we were going to be doing a play together. Then lockdown happened and the director of the play, Simon, who also plays himself, wants to try and keep things going whilst we're in lockdown. He puts forward the idea that we can rehearse using video calls... then, when lockdown finishes, we'll be ready to go into a theatre before anyone else. That idea goes down better with David than it does with me. The rest of the episodes are about how that plays itself out.

David: It's about two actors called Michael and David who are trying to keep rehearsing even after they've been locked in their houses due to a global pandemic. It's got a certain topicality. The play is being directed by Simon, who is a bit like theatre director Simon Evans. The two actors are quite like Michael Sheen and David Tennant. They are locked in their houses with their respective partners Georgia and Anna, who happen to be not unlike Georgia Tennant and Anna Lundberg.

How much rehearsal time did you have?

David: We rehearsed and filmed the whole thing over video calls. It was a mixture of rehearsing and letting it develop whilst we shot it. It wasn't like a normal filming process so we sort of found our way as we went along.

Michael: Well, we originally decided to make the first episode and just see how it went. Then if we liked what we came up with and thought it was worth doing more, then we would. There was very little rehearsal. We just got the script for the first episode and talked it through a little bit, changed a couple of things here and there and then just did it. It didn't really take much time.

Were you able to improvise/go off piste?

Michael: The scripts get written and then, when we come to record them, we talk about little areas where we might just improvise a little. So far that's worked out pretty well; some bits stay in, some bits don't. But it's nice to be able to play around with a few bits. And of course, because David and I are friends, and we've worked together, we can add stuff in based on our relationship and work we've done before.

David: There is a script, which sometimes we follow quite strictly and sometimes use as a starting point to talk nonsense to each other. There's a certain liberation in playing a version of yourself. We would always start with the script but sometimes we ended up somewhere else.

Did you enjoy working with each other again?

David: Last time I worked with Michael [in Good Omens] I had to wear tight trousers and snake eye contact lenses and fly half way round the world; this time I tumbled out of bed, put on a tracksuit and barely brushed my hair. It was a total joy from start to finish. It's been a particular pleasure to create these slightly ghastly versions of ourselves, and a slight concern to worry how close they might be to reality.

Michael: Absolutely! I mean, that's the main reason why we wanted to do it in the first place - to do something together again. Having never really worked together before Good Omens, it was such a pleasure to be able to do that - to discover that there was a good chemistry between us and then do something else together without playing those characters; exploring the dynamic between us in a different way has been great.

Michael: Well, we're both working with our other halves, which is interesting. I mean, it's interesting that we're all playing ourselves, really, or versions of ourselves - it's not exactly like ourselves. So it is sort of odd to be doing scenes with your partner when it's a different version of yourself and your partner. Our little baby, Lyra, is eight months old now. She doesn't appear in it but you can hear her in the background now and again, which is great. It's been lovely to do stuff with David's partner, Georgia, as well as working with Simon (writer and director). I hadn't worked with Simon before and that's been great, along with Simon's sister Lucy, because, you know - you have to work with who's in the house with us. 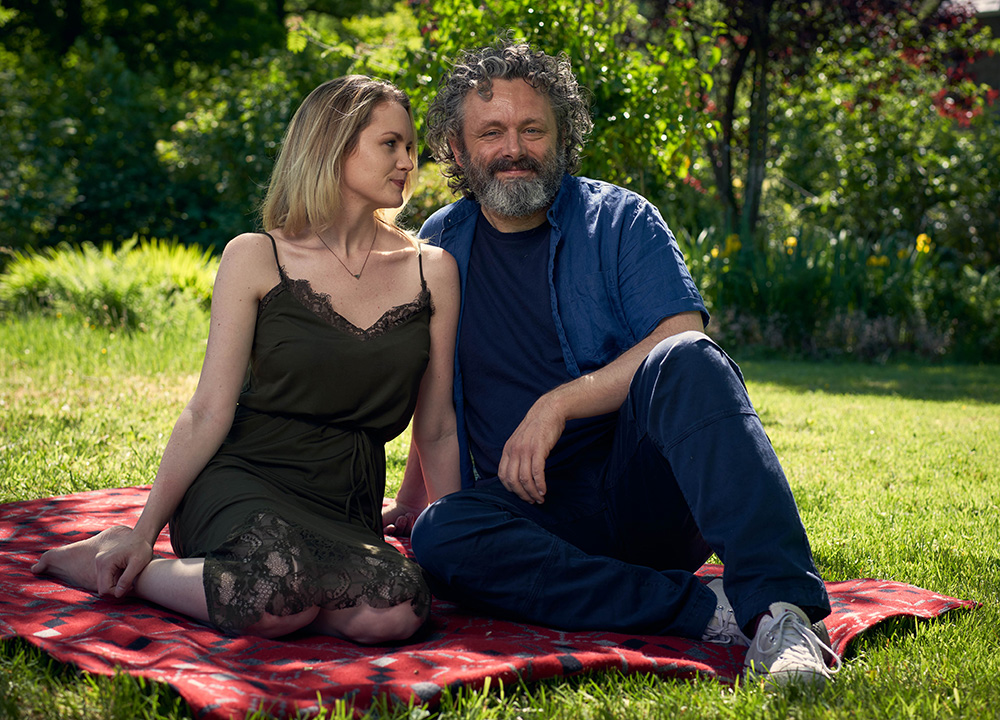 We also have some surprise guests who were very exciting to work with. I'm not going to give away who they are, but we were very, very fortunate to have some extraordinary people come and join us on this.

David: It was odd filming with my wife in our own kitchen pretending to be a (slightly) pathetic version of myself. But I have to say I loved it. I may never leave the house again. The guest cast have been a real treat too, and the advantage of nobody having to leave their front room to be involved means you can dial in some pretty surprising callers.

How did the technical aspect of filming this yourself work?

David: The scenes on video calls are fairly straight forward. There aren't a lot of options, the computer is recording the frame as if you were on Skype or Zoom or FaceTime so it's quite straightforward. The scenes away from the computer did require a bit more finesse and use of video capture technologies. My wife and I figured it out together. I miss crews though! 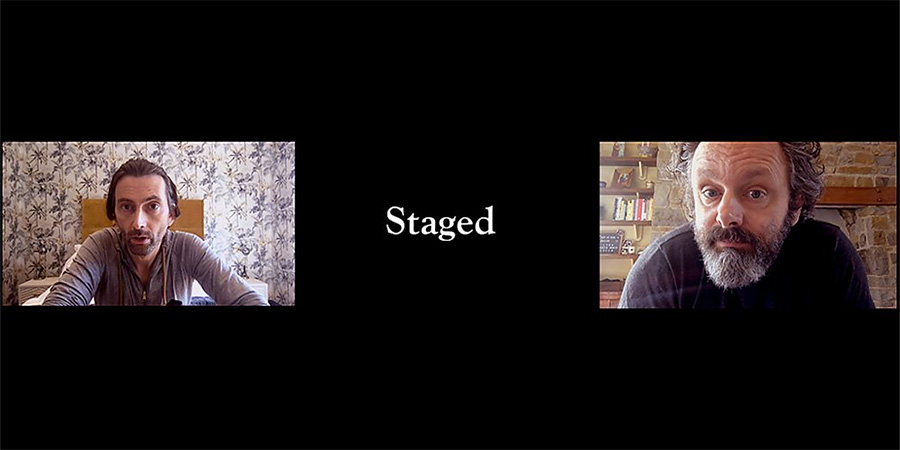 Michael: I was certainly a bit nervous about the technical aspect because I'm not great with technology, but we kept it pretty simple. Ultimately, for the scenes between David and myself when using just our laptops, we used a software programme that we downloaded that helps create better quality. It's pretty straightforward and then I used an app on my phone for the sound; even that took me a little while to work out. It has got easier as we've gone along. Originally, we tried to use a few different camera angles, so using a phone as well as the laptop, but ultimately, we realised that we didn't really need that, so we just kept it simple.

With the voice app we end up emailing the sound takes from a scene to Simon who then gets it to the editor. Early on, some of the takes that I sent to Simon didn't end up with him, so I think somebody else I know called Simon may have got those, causing much confusion, I'm sure.

Did you do your own hair and make-up?

Michael: Yes, there is no hair and make-up. I can't speak for David - I don't know how much make-up he's putting on, or how much he's doing his hair. I mean our hair is getting longer as it's gone along. So it does require a bit more sorting out as time goes along but no, no hair and make-up this end.

David: Ha! Well no one else did it! I have a hair style left over from the job I was in the middle of before everything got shut down, I've got half extensions in my hair which are beginning to fall out and I haven't really shaved in weeks. I look like Stig Of The Dump. Helpfully a lack of vanity suits the situation. 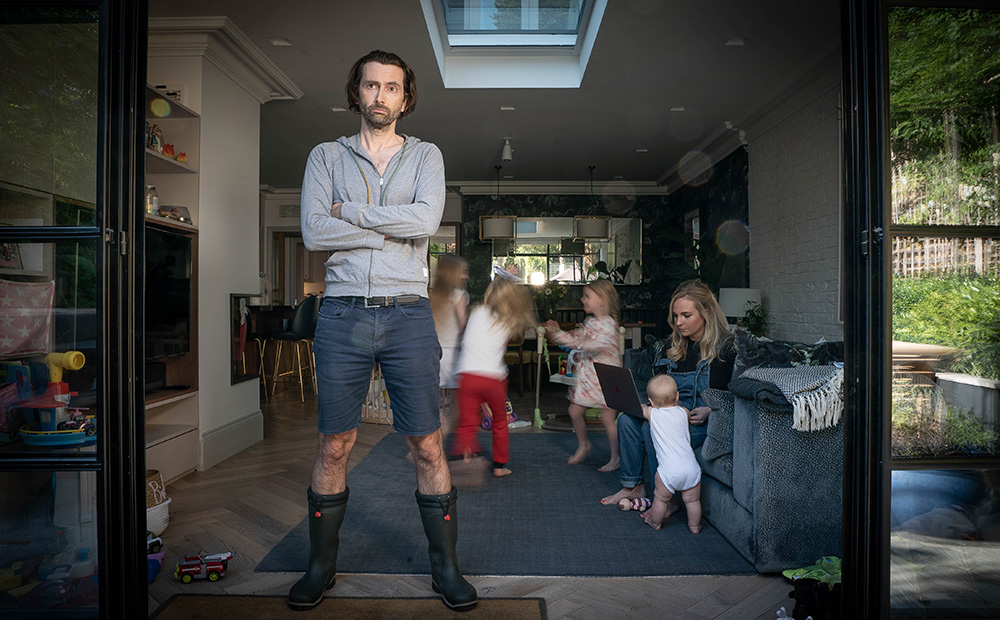 How did it feel having your families around you whilst trying to work?

David: The kids found it all a bit annoying I think. There are a couple of outtakes where one of the children would wander in and ask for a snack or want help with something, but mostly they were pretty disinterested. Because both Michael and Anna, and Georgia and I both have very young babies, the schedule had to work around bath times and bedtimes.

Michael: Well, as I say, my partner is in it playing herself so that makes it sort of easier, although it is quite difficult. If we're both in a scene together then there's no one to look after the baby, so it does get a bit complicated. Lyra doesn't always understand that you have to stay quiet whilst mummy and daddy are filming. You can hear bits of her voice coming onto certain scenes. If there are scenes between Georgia and Anna, I can look after the baby. Obviously when Anna's not in scenes she looks after the baby, but it gets a bit complicated if we're both in a scene, so that takes a bit of working out.

Finally, do you find video calls a blessing or a curse?

David: They are an amazing thing. What opportunities they give us in this weird weird time. They are not without frustrations and limitations. But we wouldn't have been able to make this without them and I feel like our family home is much less locked down than it would be without them.

Michael: Well, they've been a blessing on this because they've allowed us to do it in the first place. So, I'm all for them and long may they continue!