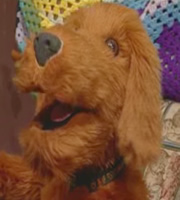 Hamish is a well-spoken red setter who considers himself to be something of an intellectual. He therefore feels highly frustrated by the company he keeps. Hamish often tries to control the chaos around him, but if that fails he is perfectly willing to sleep in the deep freezer and come out in 600 years time. 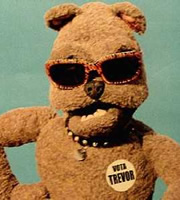 Trevor is a grey bulldog who is best described as repulsive in terms of his behaviour. He constantly swears and humps anything that moves - and for that matter anything that does not move too!

Trevor is often found humping the furniture in the house or reading hardcore pornography, while making himself sandwiches in between. His stomach is home to a pair of talkative tapeworms.

AKA: The Cat.  Voiced by: Sally Elsden 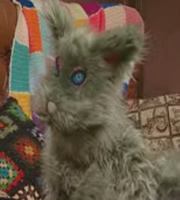 Davina is bitter Persian Blue cat. She is suffers from a serious addiction to over-the-counter medication and strong anti-depressant drugs.

Davina is often seen trying to flush unidentifiable blood-covered bags down the downstairs toilet. She has a 'boyfriend' called Vince who lives abroad and keeps sending her unusual letters explaining his absence. Davina mulls over how best to kill him when he returns.

AKA: The Parrot.  Voiced by: Petros Emanual 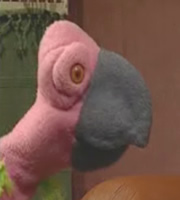 JP is bald parrot who lost his feathers in a card game. He lives in a world of all of his own, with the others often asking him, "Why are you so weird?"

Many of the rude comments towards JP come from Davina, whom sadly the parrot is hopelessly in love with.

JP's closest companion is his goldfish, which he has yet to acknowledge is dead. By the way, did we tell you, he likes to drink his own urine?