Filming is now under way on the next series of the stand-up format, with episodes filmed last night at the Electric Brixton.

Jimmy Carr continues to host the series, with his Your Face Or Mine co-presenter Katherine Ryan once again taking up her position as a judge.

Series 1 of the show was co-judged by Russell Brand, with the following two series involving Jonathan Ross, but producers have now opted to fill the third seat with a different guest in each episode.

Series 4 follows on from the success of the previous runs. Comedy Central says that the format has now reached 3 million viewers.

Louise Holmes from the channel comments: "We're delighted to welcome Noel, Sara, Joe, Richard and Big Narstie to our resident Roast judges Jimmy and Katherine to create a judging panel of comedy royalty. Series 4 will see the sharpest comedians on the circuit battle each other - with every jaw-dropping moment up for delightful scrutiny by our iconic judges."

Roast Battle Series 4 will air in January 2020 on Comedy Central. 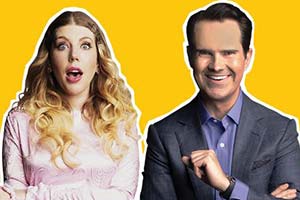