Describing the show as a "hilarious and unsettling satire", Channel 4 explain that "Generation Z sees rapacious baby boomers and disaffected teenagers at each other's throats... this time quite literally."

The show is described as a "timely, startling and thrillingly outrageous ride through a green and pleasant land rent by division, disappointment and... death."

The creators explain: "The future looks bleak for today's youth - seemingly-endless austerity, astronomical house prices, insurmountable student debt, a political system which appears intent on destroying itself... And to add insult to injury, their hard-earned taxes are being eaten up by the old - smug, self-satisfied, small-minded, 'Little Englander' pensioners whose remaining sole purpose in life is to make it a misery for everyone else.

"In a small British town, tensions come to a head when a mysterious military convoy crashes outside the Sunnywise Retirement Home. The vehicles were carrying a toxic substance, which, as a result of the crash, leaks into the local environment and infects the residents of the retirement community. The symptoms of this infection quickly manifest - an overwhelming appetite for raw flesh. They're old, they're angry and they're on the rampage. As the military scrambles to control the outbreak and keep everything out of the media spotlight, a group of regular teenagers find themselves in the thick of the battle against these flesh-eating baby boomers.

"Generation Z follows a group of wide-eyed teenagers caught up in a future far more grotesque and terrifying than anything they could have expected. They wanted to make a difference, this is their chance! But it's going to take more than a pithy meme on social media... this is a bloody and messy battle royale!

"Tapping directly into the myriad fears which define the experience of today's youth and bringing viscerally to life the increasingly stark divisions between generations, Ben Wheatley's Generation Z is a compelling, macabre, timely, outrageous, and scabrous satire presenting a modern Britain at war with itself."

Ben Wheatley says: "I'm excited to be working with Channel 4 and [production company] The Forge. Generation Z is my first original created TV project and I couldn't think of better partners."

Caroline Hollick, Head of Drama at Channel 4, comments: "Ben is a unique creative force, and I'm delighted that he's bringing this hilarious, frightening and political horror series to Channel 4. I can't wait to see him transform the zombie genre into something both outrageous and cannily perceptive."

Executive producer George Faber adds: "We're thrilled to be partnering with the hugely talented Ben Wheatley on his epic comic horror series and very much look forward to discovering how Generation Z will fight the plague of Baby Boomer zombies who are after their young flesh."

Generation Z will be shown on Channel 4 in 2020. Casting will be announced at a later date. 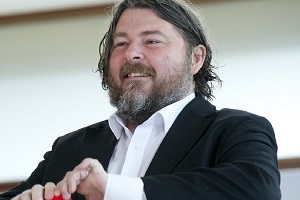