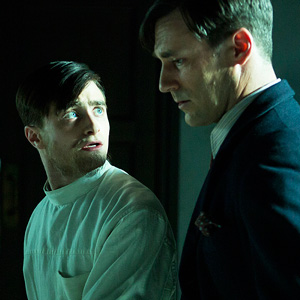 The second series of gory comedy drama A Young Doctor's Notebook will be broadcast by Sky Arts later this year, the broadcaster has confirmed.

As reported in April, Hollywood stars Jon Hamm (Mad Man) and Daniel Radcliffe (Harry Potter) will both return to play the elder and younger self of a Russian doctor in the early 20th Century.

The 4-part series, broadcast under the channel's Playhouse Presents strand of comedies and dramas, will now be known as A Young Doctor's Notebook & Other Stories, as it breaks away from the original auto-biographical comic tales of Russian writer and playwright Mikhail Bulgakov.

The first series was based on his short stories collection, A Country Doctor's Notebook, whilst the second is "inspired by a selection of [his] further works".

Series 2 will return to the small village of Muryevo in 1918 to find the Young Doctor (Daniel Radcliffe) battling against an all-consuming morphine addiction. Under the critical gaze of his "clean" older self (Jon Hamm), the Young Doctor struggles to cope with life in the hospital, the Civil War, and the arrival of Natasha, played by newcomer Margaret Clunie, a beautiful young aristocrat.

Daniel Radcliffe said in a statement today: "I had absolutely no hesitation in agreeing to do a second series of A Young Doctor's Notebook. I had an incredible time working with the multi talented Jon Hamm and of course am a huge fan of Mikhail Bulgakov's work and so was thrilled when I was told a second series had been commissioned. I am also greatly looking forward to working with our new director, Robert McKillop, and cannot wait to commence filming this summer."

Hamm says: "I'm thrilled to come back to our wonderful, weird, wild world of A Young Doctor's Notebook. Series One was an absolute blast to work on and I'm looking forward to continuing this bizarre adventure."

A Big Talk production, the series is written by Mark Chappell, Shaun Pye and Alan Connor. Series 2 will be directed by Robert McKillop and produced by Clelia Mountford.

Adam Godley will reprise his role as The Feldsher, alongside Rosie Cavaliero as Pelageya and Vicki Pepperdine as Anna.

James Hunt, Director of Sky Arts, says: "I am absolutely thrilled to bring the most talented double act of our generation back to Sky Arts. A Young Doctor's Notebook was the channel's most successful programme to date and was unanimously loved by our customers. It is a perfect fit for our Playhouse Presents strand with its world class talent both on and off screen."

Sky Head of Comedy, Lucy Lumsden said: "We're delighted that this supremely talented cast has been able to reunite in another dose of the darkly comic series A Young Doctor's Notebook."

Series 1 was broadcast on the four consecutive Thursday evenings of December 2012, and is now available to buy on DVD.

Both series will be broadcast in North America by the Ovation arts television network, from an unknown date late in 2013 or during 2014.

Here is the trailer for the first series of the comedy: