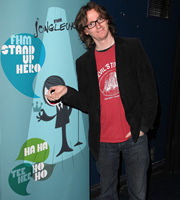 Ed Byrne follows the very first FHM Stand Up Hero competition, which sets out to find Britain's best undiscovered stand-up comedian. Hopefuls from the 2009 heats and regional finals held at Jongleurs clubs around the UK aim to make it through to the grand final in London, where Ed gives the lucky finalists some advice on how to deal with the pressures of the big night.

Asked what makes a successful stand-up, Ed commented: "It's really important to try your material out in front of a live audience before you try your luck on stage. There are a few other things you can do to make a good impression. Own the stage, look at the audience and try and engage with them." He added: "Competitions like Stand Up Hero are an excellent way to jump the queue when it comes to making a career as a comedian. You can still be quite good and kicking around the B circuit but a good shot at the right competition, in front to of the right audience can make all the difference."

The lucky winner bagged £5,000 (the biggest comedy prize in Britain at the time, after the Edinburgh Festival) and a tour of UK Jongleurs clubs, plus expert coaching from Ed himself.

Ed Byrne also got some insider knowledge and tales of life behind the mic from comedy giants including Dara O'Briain, Jason Manford, John Bishop, Brendon Burns and Adam Bloom.

The pilot episode mainly focused on the eight finalists, who were: Tim Bradbury (the beatboxer), Kevin Shevlin (the downbeat young one), Richard Brophy (the Aussie), Marlon Davis (the happy winner), Stuart Black (the guy with the sun cream gags), Richard Bowen (the nervous pun-heavy comic), Barry McDonald (the big comic from Scotland), and Olawale Gbaja Biamila (the black guy with jokes about his missing dad).

However, interestingly but perhaps somewhat cruelly, we also got to see some of the failed auditions from the heats. This included footage of Stephen, a comic who totally died on stage in London; duffle coat wearer Danny with a quirky act who probably should have been voted through; and a female comic from the Glasgow heats who failed to win over the audience with her gags about men.