Here's a picture of comedy greats Morecambe & Wise... but if you look closely you'll note it is not a normal picture - it's a montage made entirely from breakfast foods: 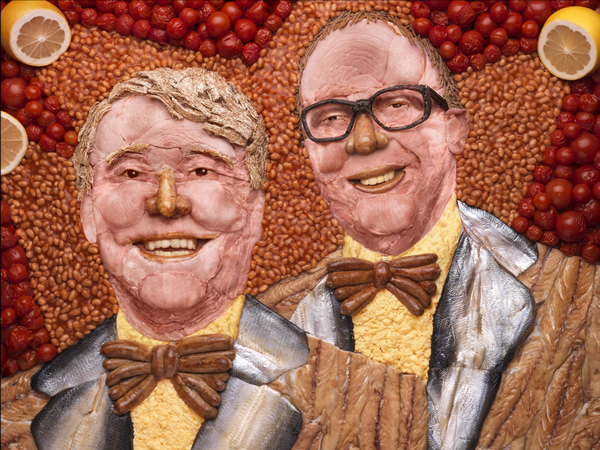 This unique artwork has been commissioned to mark the launch of UKTV Gold's Bring Me Morecambe & Wise - a new documentary series featuring rare and unseen footage of Britain's favourite comedy duo alongside the much loved extracts they are most famous for.

The theme for the montage was chosen as 'Breakfast' after a poll of 2000 comedy fans named the duo's breakfast sketch (seen below) as most iconic of the their sketches.

The artwork was painstakingly built by artist Carl Warner and his team of four 'food stylists' over two days. The team used a variety of foods which featured in the original sketch, from scrambled eggs to sausages and grapefruit.

The lapels on Eric and Ernie's suits were created from the fillets of 17 smoked mackerel and complemented with stylish 70s jackets made from six kippers. More than two dozen eggs were also employed for the pairs' shirts - with one half scrambled to recreate the frilly fronts, and the other cooked into an extra buttery omelette to form the retro collars.

Apparently, the most challenging aspect of creating the photo was to ensure a likeness of the British comedy legends. A variety of sausages, from cocktail and chipolata to Lincolnshire were used to create the duo's facial features, with gammon steaks forming the shape of their heads and bacon contouring their cheeks and chins. Warner finished off the masterpiece with a smattering of All Bran for Eric's hairline and an abundance of Shredded Wheat for the luscious locked Ernie.

Blanched almonds, mushrooms and sultanas were used to create realistic eyes and teeth, whilst Eric was finished off with a pair of his infamous glasses - courtesy of vanilla pods. The duo were finally lit in their on-stage setting by several white grapefruits, complemented by seven cans of baked beans and 150 roasted tomatoes.

Steve North, the boss of the GOLD channel, said: "The breakfast scene is by far my favourite Morecambe & Wise sketch and clearly the British public love it too, so this seemed the perfect opportunity to bring two comedy heroes to life and mark the start of an exciting new show on Gold that will celebrate two national treasures."

Bring Me Morecambe & Wise is a five-part series which airs on GOLD on Wednesdays at 9pm from tonight (21st November 2012). Below is one of the rarely seen sketches included in the documentary: