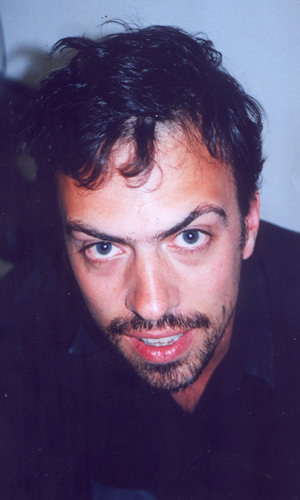 British Comedy Guide talks to Nat Segnit, the co-writer and co-star of Strangers On Trains...

Hi Nat. Thanks for taking the time to talk to us. Could we perhaps start out by asking you to fill us in about your background? We read on the internet you're a 'textual analyst'... whatever that is?

I do this and that apart from write for radio. The 'textual analyst' reference you found on Google is to do with a couple of papers I co-wrote for the Institute for Public Policy Research, about the language used in media accounts of climate change. So there you go.

Your first comedy was Radio 4's Dolphin Therapy in 2004? How did you come to get involved in writing comedy?

Dolphin Therapy started off as a short story which got published in a now-defunct section of the Independent on Sunday. I got talking to a producer at Radio 4 about it, he thought it might make a good play, and a couple of months later it was commissioned. But I'd been working on various TV comedy projects for years, none of which made it past the early development / pilot stage. Which is the way it goes, I suppose. You hammer at the door until your knuckles bleed, and then a different one opens.

Strangers on Trains is quite a hard show to explain - the audio is presented as if it you're talking to people on trains, but in reality you're actually recording it in a Radio 4 studio?

We had talked about recording it on an actual train but the technical problems proved insurmountable. We found the poor catering and drab fluorescent lighting at the recording studio surprisingly redolent of the average train journey, however.

Ha ha. Why did you decide to base the show on trains?

We wanted to make a character-based sketch show and the train framework seemed a good way of avoiding that becoming a bit of an arbitrary succession of voices. It also gave 'Nat' an opportunity to sound off in his airy-fairily sententious way. Trains in mainland Europe are like cafes. Ours are like chapels of rest. That sort of thing.

Isn't it an un-written rule that one shouldn't try and strike up a conversation with fellow train passengers though?

Absolutely. Whenever possible I - the real live non-apostrophic Nat - like to sit in a corner seat behind a pile of dauntingly intellectual reading matter wearing an expression of implacable sternness. That generally keeps the riff-raff at bay, I find.

Which character was your favourite to 'interview'?

Ian, the white-rasta lifeguard from episode one, with his needlessly complex grid system. I like needless complexity. And there's a character from episode six called Adrian that I'm very fond of. He tells a sort of ghost story with an obscene twist.

Stewart Wright voices all the 'interviewees'. How did you and he come together?

I knew his sister at university. Stewart and I would bump into each other from time to time. Then after he'd done a pilot with Chris Langham, who'd been in Dolphin Therapy, we met up at Paddington Station, as it happens, and got talking about working on something together. The starting point was a character that ended up in episode four - Pete, the depressed driver of one of those miniature tourist trains you get in the South of France. And we built it up from there.

Pete sounds like a great character - we look forward to hearing him. So, how did you come up with the characters we hear in the show then Nat? Are any of them based on anyone you or Stewart has actually met?

Most of them came from nowhere, by which I mean the part of your brain you're only partially conscious is working away at the problem of coming up with material. But some of them were based on real people. There's a Lithuanian pool cleaner inspired in part by the cleaner at the gym I infrequently attend. I've never spoken to him, but whenever I saw him mopping the changing-room floor I would imagine what was going on in his head.

Would you be interested in doing a second series of Strangers on Trains? If so, would you stay on trains or venture onto a different form of transport?

Strangers on a Plummeting Plane. Nat travels on the airlines of various former Soviet Republics with notoriously poor safety records, until he finds himself on a plane that develops catastrophic engine failure. In the fourteen minutes it takes to descend from 35,000 feet he uses an adapted black-box recorder to interview passengers whose impending vaporisation lends their accounts a certain disinhibited directness. It would be a one-off, of course - our Christmas special.

Ha ha. Just make sure you don't choose to fly with XL or you won't be going anywhere! Our final question, something we ask everyone: excluding your own, what are your favourite comedy shows?

The Day Today, Brass Eye, The Smell of Reeves and Mortimer, Father Ted, Curb Your Enthusiasm.

Ah, good list! Thanks very much for talking to us Nat.