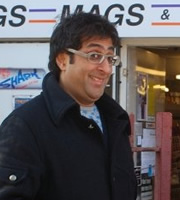 Ramesh is the owner, or vanguard if you will... actually, no, just 'owner'... of convenience store Fags, Mags and Bags.

Ramesh is Lenzie's premier vendor of newspapers, confectionary, and last minute green toilet roll which is invariably accessed by that big long stick with a hook on it from a high shelf. Ramesh loves being a shopkeeper and loves all the aspects of the art of shop (and, yes, he genuinely considers it to be an art). He applies the 'low return' rules of shop to all other aspects of his life, and therefore comes across as a bit tight with money. 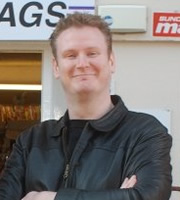 Dave is Ramesh's sidekick, best friend and to the causal observer, his heterosexual life partner too. Dave is unencumbered by ambition, angst, and adenoids (after a childhood incident involving a snowball with a stone in it).

Dave is one of life's learners - he has a hunger for knowledge which is satisfied by the burgeoning spectrum of part-work publications which rain like intellectual gold dust onto the shop counter (and a free binder with part one).

You get the impression that Dave would work at the shop even if he wasn't paid. 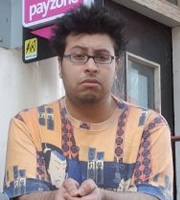 Ramesh's son Sanjay is both angry and confused. One thing is quite clear to him though - he doesn't want to work in a shop. 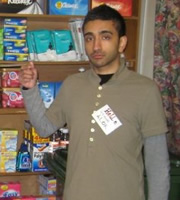 Alok, Ramesh's other son, would like to think of himself as the Asian Richard Branson, to the extent that he would, if he could, happily launch a new online bread roll delivery service dressed in a bridal gown.

Unfortunately Alok's only outlet for his cutting-edge business ideas is his dad's shop, where the press are rarely assembled, and dad isn't interested. In fact, dad's response to his many schemes (internet pillar, hover shoes, self building Lego) is remarkably like an open mouthed guffaw.