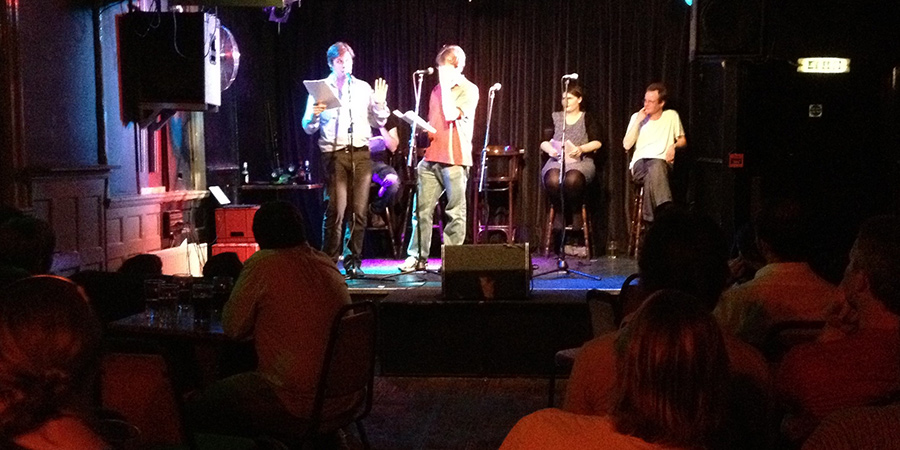 Oxforshire-based sketch group The Albion Basement are currently publishing a podcast called 1000 Sketches in 1000 Days. The undertaking is as big as the title suggests... they'll be releasing a podcast every day until 2023! Alastair Tervit from the group kindly took time to explain to BCG Pro what their process is, and - with over 70 episodes already published - what they've learnt along the way, so far. 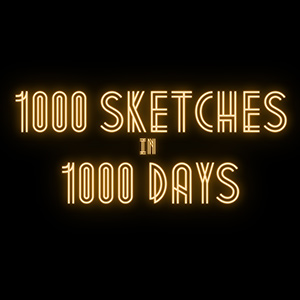 Over the last 8 years my chums and I have done 8 hour-long, carefully crafted, live shows of sketch comedy in the pubs, bars, and bookshops around town. Together they comprised 188 original sketches.

With live shows not an option and having built up a significant inventory of unperformed sketches, I suggested a change of pace. Like the majority of humanity, we started a podcast. Since December 1st 2020, we've released one every day and hope to continue to until we've sated our need for arbitrarily round numbers and given the world 1000 Sketches in 1000 Days (that's what it's called).

What follows are some notes about what our process is and what we've learned when changing our ways so significantly. To be honest, we pretty much made it all up as we went along, so take from this what you will. 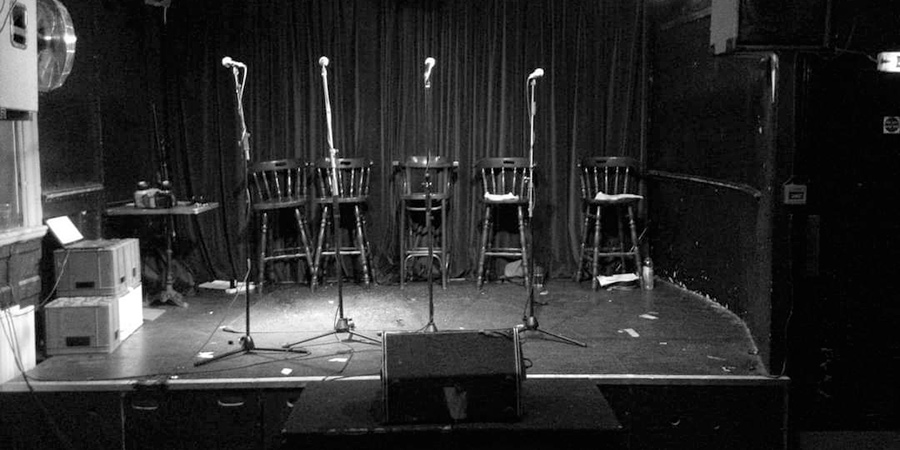 Our writing process over the last 8 years has barely changed and is pretty simple. At its heart is a weekly meeting to which we each bring sketch drafts. Over the course of an hour or so each offering will be cast, performed and judged. If we really like it it'll go into our accepted pile, if no one thinks the core gag works it will be rejected, or (more often than not) it'll go on the rewrites list and be assigned to someone else to look at next. Most sketches go through 3 or 4 re-writes before being accepted.

These meetings are huge fun. Sure, it's great when an audience loves a sketch that's just been performed but the best moment is when the group hears a sketch for the first time and absolutely loves it. I've never laughed so hard as in some of those meetings, and it's that joy that we're looking to try to recreate and share with this podcast.

A key part of sharing that joy is that it's not just about the sketch itself. Our sketches tend to be pretty tight and without much room for improvisation: we're writers who forced ourselves to become performers, so improv within a performance doesn't always come naturally. But we do love talking about the sketches, taking the piss out of them (and each other), and going off on tangents. So the structure of the podcast mimics the writing meetings with little pre- and post-production chats bookending the sketches.

Even in the sketches we've loosened up considerably. In live shows, we tried to mitigate our flaws as performers by rehearsing over and over again until we were thoroughly sick of all the gags before the first night. For the podcasts we pick the sketches we're performing literally seconds before we record. We're reading them for the first time in probably months (or years) as we perform them and almost always can't remember the end of the sketch when we start.

Inevitably we fluff a load of the gags and pick totally inappropriate voices for the characters because of that, but we normally notice as we're going along and try to make up for it one way or another. More importantly it makes it all more spontaneous so we laugh at ourselves, each other's performances and the material more naturally. Hopefully this makes the recording feel warmer and helps the listeners laugh with us.

You never know what's going to be funny 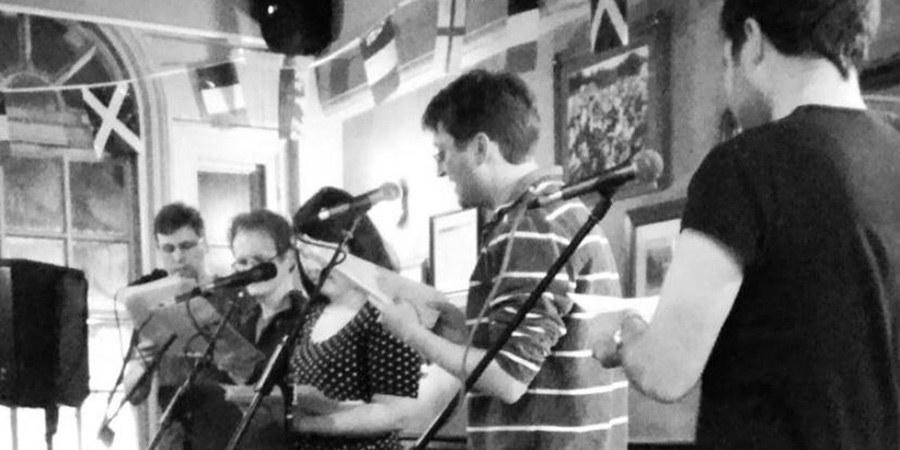 After the first live show we did a man came up to us and said: "That was really funny. I had to try really hard not to laugh." We wondered whether we'd totally misunderstood the point of the evening. Anyway, that man aside, there's no telling what an audience is going to laugh at on any given night.

Already within the first two months of the podcast we've found that to be true within the group as we record. Sketches we've essentially ignored for over 5 years and would never have considered for a live show have had us in hysterics. Of course others which we remember with fondness if not precision have been met by stony silence, but at least it gives us the opportunity to tear it to pieces and mock the author for their substandard work.

The same is hopefully true for the listeners. With the diverse nature of what we're putting out, it's unlikely that every day will leave every listener in pant wetting hysterics. But at only five minutes an episode, hopefully there's enough there to encourage them to come back the next day and find something more to their liking.

Sound quality and the importance of clapping 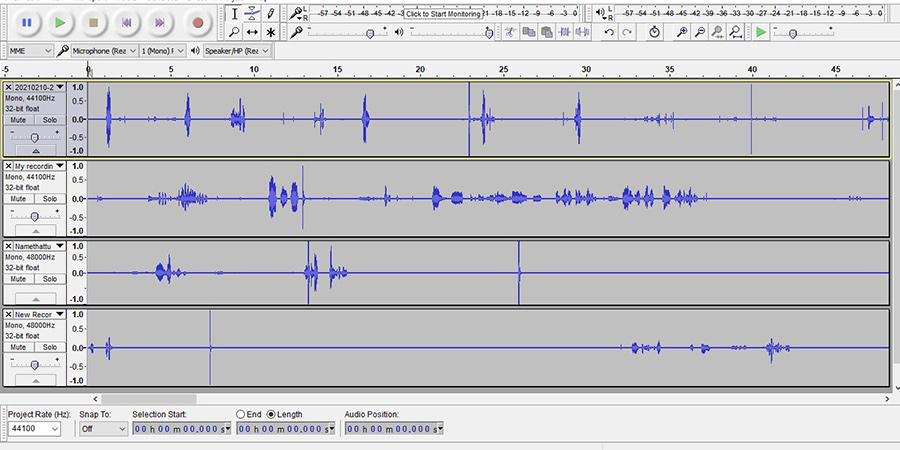 Clearly sessions have to be recorded remotely but I was determined to get the best sound quality we could. Although our episodes are only 5 minutes long, we want them to be as immersive as possible and avoid all the little glitches recording online often creates. We tried a few things but eventually, creating a rod for my own back, I concluded the cleanest sound came from everyone recording themselves individually and me reassembling it all into a coherent whole.

Of course, this means I have to synchronise multiple recordings, and that's where the clapping comes in. At the start of a recording, everyone shuts up for a few seconds, I do a short countdown and then have everyone clap. Getting those clap wave forms all lined up in a row should have everyone more or less in synch, although you have to remember to put the instigator of the clap a split second earlier than everyone else to make up for internet and human lag time.

This is as time consuming as it sounds, but not only gives better sound quality but also far greater scope for snipping out the dullest bits and the worst of the background noise. It's not perfect though; I am yet to find a way to remove the sound of someone practicing the oboe in the distance. Answers on a postcard, please.

Editing and the shaping of sounds 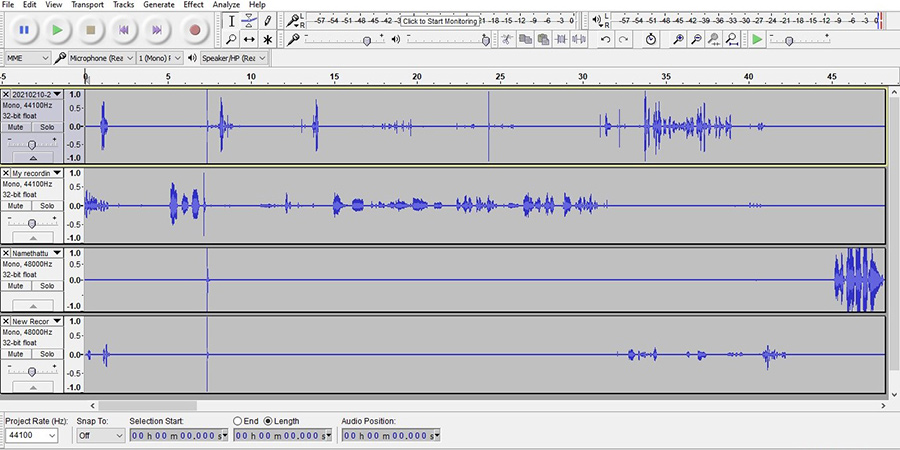 Recording a week's worth of episodes takes around an hour; editing them takes closer to seven. Part of that is polishing: extracting coughs, lip smacking, creaky furniture; excising anything libellous or extraordinarily offensive; cutting down silences to improve the timing of a sketch, especially given the slight lag caused by performers being remote from one another.

More importantly, there's, as Ian Boldsworth puts it, "Finding The Funny". We record the sketches essentially as written but there's plenty to be done to enhance the unscripted material without making it sound like it's been tinkered with: reordering the chat, tightening up the anecdotes and lifting a bit of corpsing to include as some little bonus outtakes. The podcast gets its shape, personality and often a good proportion of its laugh count from these sections and much of that is created in the edit.

Throughout the editing process I've been obsessive about keeping in every instance of laughter. Laughs are like yawns, they're catching, and as a podcast listener it's Paul F. Tompkins' uncontrollable giggling or Ed Gamble's big belly laughs that often elicit the biggest laughs from me. Like a sitcom laugh track, they provide a signpost to the audience that there is funny to be found here. If only a single person has found something amusing in a locked room, does it not stand to reason that others might also find it funny in the wider world? I hope so. It also allows for the inclusion of outtakes and, if Denis Norden taught us anything, the world loves to witness someone screwing up their lines.

Preparation and the problem of Pete Postlethwaite 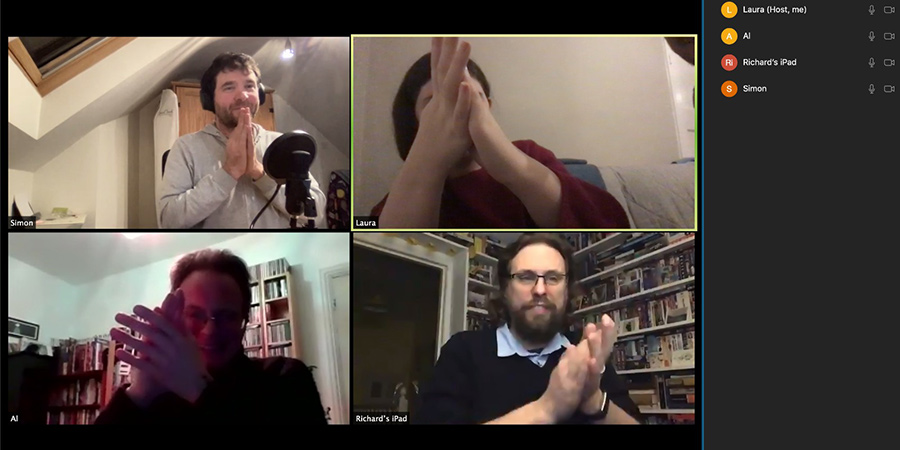 The one thing that we did get right from the start was the need to be prepared. I realised we needed a long run up at this as we really didn't know what we were doing to start with. Miraculously we managed to overcome our natural disorganisation and had nearly 100 episodes ready to go before we published our first. This amount of preplanning is probably unnecessary for most podcasters, but having imprisoned ourselves with defined goals, the likelihood that we'll end up missing a week or two down the line loomed too large for us to not have a contingency. It also allowed us a greater degree of freedom in sequencing the order of release. It lets us split up all the recordings from a low energy week, or when one of the microphones is making someone sound robotic and potentially gives us options if we want to tie something to a specific release date.

More importantly it helped with continuity. Ideally every episode should be as self-contained as possible, following the old comics adage that 'every issue could be someone's first' and luckily hardly any of our sketches are runners, nor do they feature recurring characters. But the unscripted sections are different. We've been friends for well over a decade, and have plenty of in-jokes that would make no sense to a casual listener. Trying to make those intelligible to an audience without completely derailing the spontaneous chatter can be tricky. For example, in an attempt to make sense of our deriding a group member's continued inability to pronounce 'Pete Postlethwaite', I was eventually able to group four recordings together that had been recorded months apart. Each had enough of the explanation (and mockery) for a listener to understand what we all found so funny, if they were listening to the podcast in order.

Working on this kind of continuity comes at the price of scheduling nightmares and reams of notes about references we've made in the chat. But if we can make a listener feel like they're part of the group and that there are familiar things in each of the episodes hopefully we can keep people coming back for more.

That's quite enough of my blather. I hope you found parts of it interesting or that, at the very least, it occupied some of the brief time you'll spend on this earth. Time that could definitely be better spent listening to 1000 Sketches in 1000 Days. Look Ma, I can do marketing now!