Suzi Ruffell and Phill Jupitus join us for a very fun, very ramshackle episode recorded at the Laugh Out London comedy festival. It's all in here folks - from the sublimeness of opera to the ridiculousness of Jeremy Paxman interviewing ghosts. Also, Dog-Pigs, 'the Jupes', Cyndi Lauper and Knock Knock jokes. It is so jam-packed that at one point the recording device breaks down.

Do sing the praises of Flatshare Slamdown whenever you find yourself with a captive audience of would-be fans - there's loads more episodes winging their way towards the world in 2016! 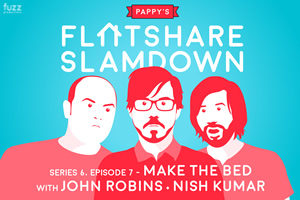 John Robins and Nish Kumar are on board for a very raucous episode by the end of which everyone has their tops off (and one person has their bottoms off... 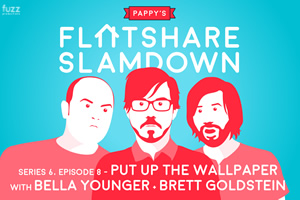 Series 6, Episode 8 (Put Up The Wallpaper)

Bella Younger and Brett Goldstein guest on a show that contains papier mâché, Pokémon GO and pornography - and everyone has a real good time. Do remember to tell... 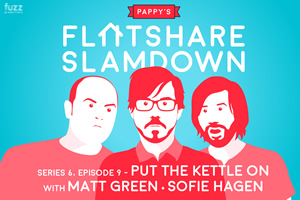 Matt Green and Sofie Hagen join the gang at the Leicester Comedy Festival for a kettle-themed show. Within you'll find totally terrific tea-bagging, kazoos a-plenty and a baby being bath... 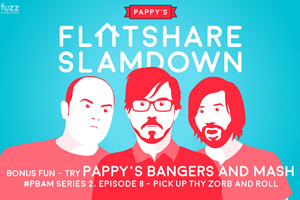 Hello Flaslammers!! You may or may not know that, as well as your beloved Flatslam, we also have a podcast called Bangers And Mash. The way it works is that... 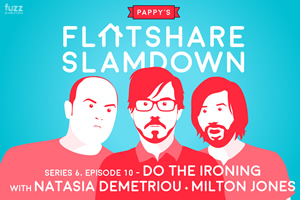 Natasia Demetriou and Milton Jones join the teams in a cut-throat battle to avoid doing the ironing. As you'd expect, the show features reggae, murder, philosophy and a quickfire round...