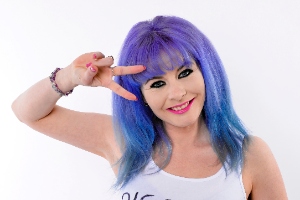 Samantha Pressdee is at this year's Fringe with her first full solo show, and tells us about her comedy-activism here.

Sam Pressdee has been lookin' for Lockdown Love.

Comedian Samantha Pressdee is calling for submissions from comedians for a new reality dating show. The show follows campaigner and comedian Pressdee as she launches her new #loveinlockdown campaign.

Samantha Pressdee wants to spread the love in lockdown

I have received a cry-from-the-heart from comedy performer and social activist Samantha Pressdee. I think it speaks for itself...

Her show is directed by Phil Nichol and did really well at the Edinburgh Fringe last year. Covered is a raucous and slightly dirty show tackling mental health provision on the NHS and austerity cuts. I caught up with Samantha to find out all about it.

"I see comedy as a platform for the truth."

When did you last have a meltdown?

Who was the biggest prick at your school?

Another from Richard Herring's stock of Emergency Questions