Comedians Ken Cheng and Leila Navabi are the hosts of Don't Blame Me, Blame My Brain, a new CBBC series focused around answering science-based questions.

The ten-part series is aimed at children aged 7-11, and "sets out to answer some of the burning - and often quite ridiculous - questions that our brains come up with." Example questions include "can we talk with dogs?", "what would happen if we never went to sleep?", and "could we catapult ourselves to the moon?".

The format is described as offering a "wicked combination of clever science, surreal fun and live action mixed with zany graphics and animation."

The programme is made by production company Screen Glue, who previously worked on the popular CBBC series Hey You, What If...?. The writers are Joanne Lau, Robin Morgan and Danny Robins.

The producers explain: "In each episode, Ken is continuously hounded by his (talking, animated) brain, to answer one specific question such as 'what if the floor really was lava?' To help him answer each question he calls on his friend Leila, who throws herself into assisting him in her own very madcap way. He also calls on various experts and celebrity friends to help, such as TV medic Dr Ranj Singh, Paralympic champion Dame Sarah Storey, England footballer Leah Williamson and lava expert professor Chris Jackson.

"Animated sequences illustrate what Ken figures out each week, with every question answered with real science - but mostly silliness!" 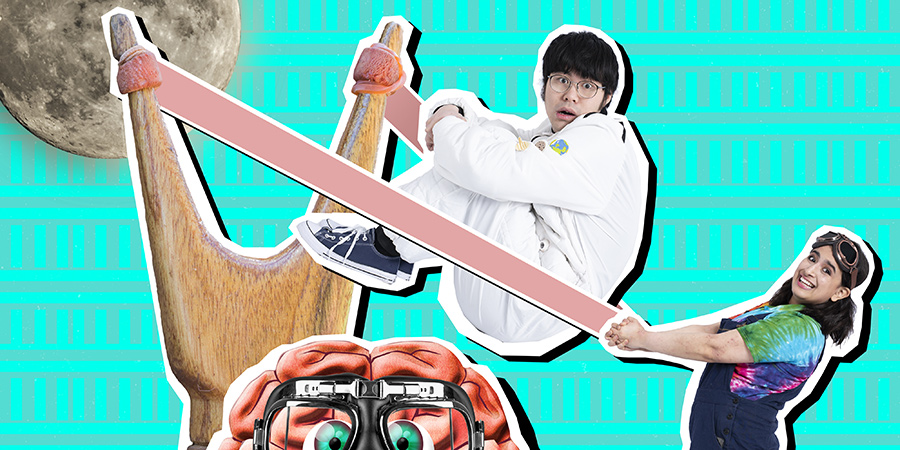 Executive producer Jasper James says: "Don't Blame Me, Blame My Brain shows just what can happen when you don't actually overthink things! Our brains quickly came up with the series concept when CBBC was looking for new ideas, and it was commissioned equally quickly. The result is a pacey, funny and alternative edutainment show, presented by exciting new talent. We are thrilled the BBC has once again supported our unique approach to delivering rigorous science in surprising packages."

Don't Blame Me, Blame My Brain premieres on CBBC and BBC iPlayer this Wednesday 28th April at 5:15pm, and will run weekly thereafter.