Jeepers Creepers: Through The Eyes Of Marty Feldman 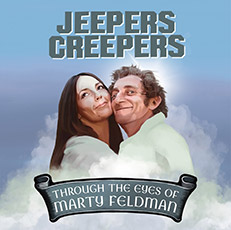 Originally directed by Monty Python's Terry Jones, historian and biographer Robert Ross's play about the relationship between comedian Marty Feldman and his wife, Lauretta, has now been adapted for an audio production.

Marty Feldman was an iconic, much-loved comedian and writer, who tragically died too young on the last shooting day of his final film: Graham Chapman's Yellowbeard. The driving force behind the comic genius was his wife, Lauretta (allegedly one of the inspirations for Patsy in Absolutely Fabulous).

With his wife Lauretta as the power behind the throne, his rise and decline is related through bittersweet memories of the past and intoxicated infidelities in the present. Jeepers Creepers is a fantasy. A two-handed snapshot of a loving, complex, fascinating couple; seen through the unique prism of a cornerstone of comedy. The unique eyes of Marty Feldman.

Adapted by Ross and producer/director Barnaby Eaton-Jones, Wink Taylor stars as Marty with Jessica Martin as Lauretta, with a range of stars cameoing as themselves.