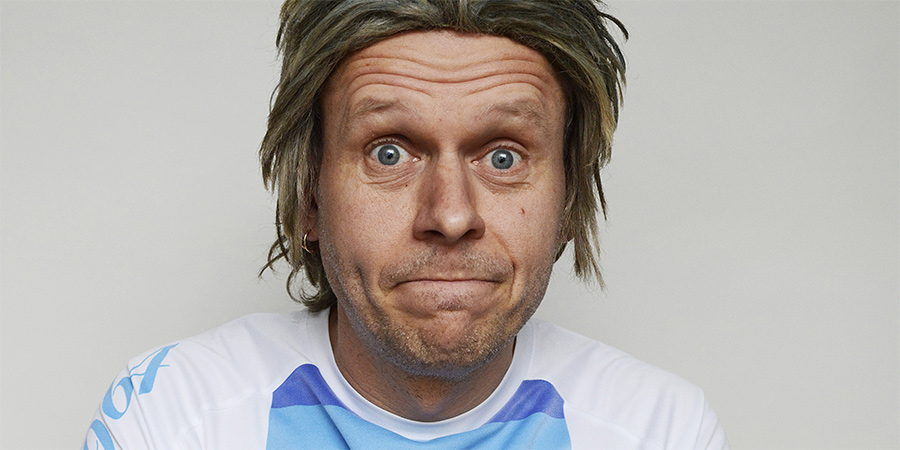 Musical comedian Kunt - who performs as Kunt And The Gang - has been building up online fans ever since he set up a MySpace page. Performing both live and online, his hit songs often feature explicit lyrics, as titles like Use My Arsehole as a Cunt and I Have a Little Wank and I Have a Little Cry attest.

At Christmas he hit the headlines, as his attempt to get new song Boris Johnson is a Fucking Cunt in the charts gained momentum. Despite many radio outlets refusing to play the track, the political protest reached an impressive peak position of #5.

We thought it was about time we found out more about Kunt and the man behind him, so emailed some questions to the KATG headquarters...

How did you get started in comedy?

Accidentally. I used to make up silly songs and crap parodies when I was a kid, then in my late teens and 20s I started a couple of unsuccessful bands... but I got fed up with ringing round nine people whenever you wanted to rehearse, so eventually struck out on my own. Luckily enough, this coincided with the early days of social media before all the monetisation and algorithms were in place, so I managed to connect with an audience of wronguns and eventually started doing little tours around the country in pubs and band venues.

How would you describe your comedy style?

It's musical comedy but there's something about the phrase 'musical comedy' that seems to conjure up the image of something overly clever and unfunny peddled by some posh, smug twat(s).

I suppose, with my songs, I started off by trying to find subjects that hadn't been covered by conventional songwriting and the comedy came from the ridiculousness of some of the things I set to music... before eventually getting sidetracked with being a hearse-chasing synthpop celebrity paedo hunter.

We're really curious to know more about your life - it looks like you try to keep your real name and details hidden. That's presumably a deliberate move?

I wasn't that arsed when I first started off, but then over the years I ended up on several occasions grappling with people on stage who took umbrage with the content of some of the songs. I know it might sound odd but off stage, day to day, I just like a quiet life and prefer to be able to go and get in my car and pop down to Asda without having to wrestle someone en route.

Do you ever regret choosing the name Kunt? It probably makes it harder for you to get booked, or mentioned in the press?

In retrospect I do think the name might have been a little bit of an albatross around my neck in terms of making any headway off the back of sold out runs at the Edinburgh Fringe, but the material would have been the same so I'd have probably been fucked anyway.

Ultimately, I never regretted calling it Kunt and the Gang as I always felt it set out in fairly honest, straightforward terms what the level of the entertainment was going to be. That said, several times in Edinburgh you'd see people storming out of the show with a cob on, and you'd be thinking to yourself 'What else were they expecting an act called Kunt and the Gang to do?' 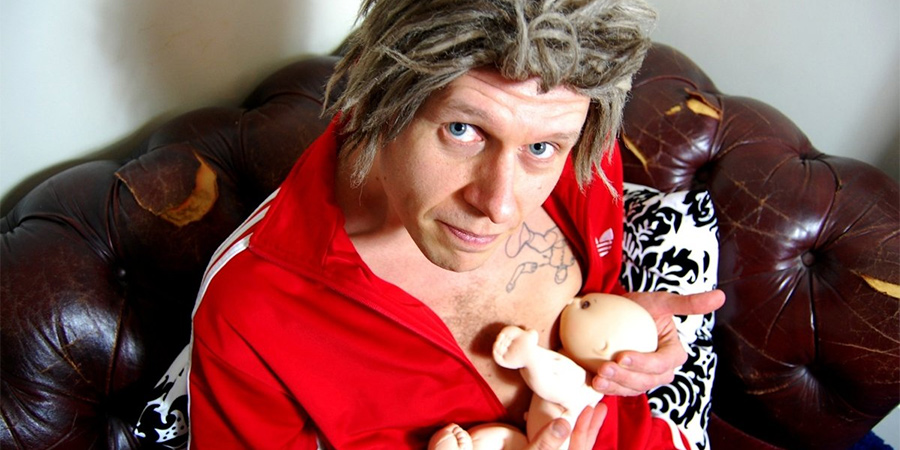 In 2011, you and Bob Slayer won the increasingly prestigious Malcolm Hardee Cunning Stunt Award for promoting your show using penis-shaped stickers stuck on other posters. You pissed off a lot of people doing that...

It never crossed my mind for a second that comedians at a comedy festival would be upset with seeing a crudely drawn cock stuck to their poster. Then, about three days into the Fringe, there was talk of being sued for anything from £3000 to 50 grand by two of the big companies, Avalon and Underbelly.

I had a bunch of acts chucking me dirty looks and muttering things about me when I passed them in the street; I got threatened by one over-zealous turn who worked himself into a stew about the idea of someone sticking a cock on his face; and another act's agent shit her knickers and sent us an invoice for £900 for damage to her client's posters. But The Stand comedy club came out and offered to cover any legal fees and there was a lot of goodwill from the comedians who were doing shows there.

So, generally now, how does the comedy circuit generally view you?

These days I'd imagine a lot of them probably think I'm a National Treasure which I find extremely humbling, though not entirely without foundation.

You came to widespread attention in December with your assault on the charts. You must be thrilled with how it went?

I thought I was well over getting this excited about anything but everyone else's excitement about the idea of a song calling the Prime Minister a fucking cunt fighting it out for the Christmas number one rubbed off on me big time.

It was a mad, mad few days. The press went mental in the run up to the announcement of the Christmas charts, and then - as soon as the record went top 5 - that was it, over. It was a real insight into how your 15 minutes of fame works, though I think I managed about 4 days before the attention waned so I'm definitely up on the game. 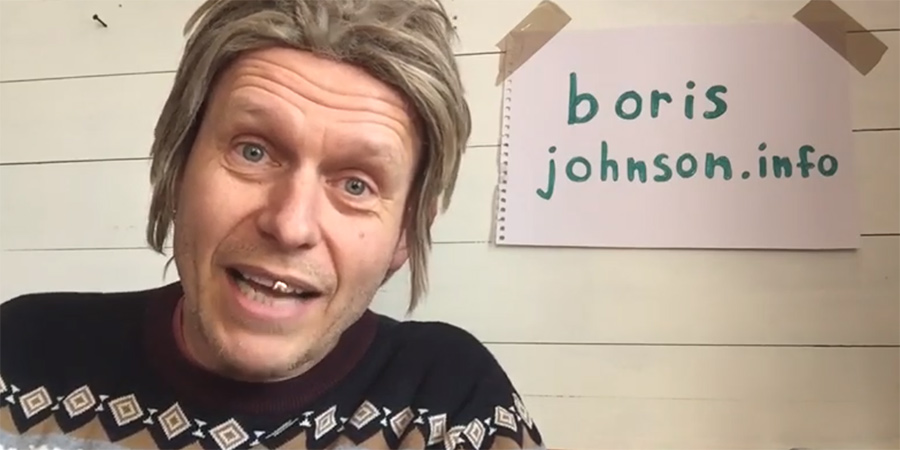 Have you picked up many new fans since then?

My numbers went up on the socials by a couple of thousand, but - the way the algorithms work - who knows whether they've seen anything I've done since? It still seems to be the same half dozen people liking and re-tweeting stuff, which I'm grateful for because they're going to be the first ones I make drink the dodgy Irn Bru and whose bank accounts I empty after I tell them the UFOs are coming to get us.

Having made your views on Boris Johnson perfectly clear, have you got any other targets lined up?

No. Even though the song went top 5, I don't feel like my business is properly concluded with Boris Johnson as he's still there, still in charge and still every bit as much of a fucking cunt.

I've worked with people like him before - he's one of those people that says he can do things, whether he can do them or not... and he says it so matter-of-factly, that people believe it. He's like David fucking Blaine in that he has this ability to do the smoke and mirrors thing and make everyone look elsewhere. But he's a dangerous, lying psychopath. He's presided over our exit from the EU with a worse deal than the one Theresa May negotiated, his corrupt cronies and their cronies are stuffing cash in their pockets from the PPE contracts he oversaw the handing out of, and worst of all, even though we're an island, who could have just 'taken control of our borders', we have one of the worst per capita Covid death rates in the whole world.

To put it in perspective, Boris Johnson has done a worse job of handling the pandemic than Donald Trump. And this idea that he can say he takes full responsibility for the 100,000 plus deaths and that be enough. These are people's relatives and friends whose lives have been snuffed out because of that shabby, insincere bag of custard cunt.

Frank Lampard got sacked from Chelsea while only 5 points off the Champions League places. Boris Johnson has overseen the death of over 120,000 people on his watch and he's still going. He should be on fucking trial, except his posho fucking mates and the political media bias trumpeting the vaccine will mean that he'll get away scot-free and will probably end up with a multi million pound book deal and directorship of a load of companies, the cunt.

Do you think the chart assault will become an annual thing?

No, definitely not. Having to handle the promotion side of things and trying to cajole people into spending their money always feels like selling your soul, so I will only ever do it again if the occasion totally calls for it.

That all said, I'm going to re-charge my batteries, get myself in good credit with supporters and then in 2022 I might dust off my regal anthem God Save The Queen's Cunt and have a go at the evil old reptile's 70th Jubilee.

Your last Edinburgh Fringe show was in 2016. The Final Kuntdown was a farewell show, but following your success in the charts could a return be on the cards one day?

You recently released an EP on Bandcamp of some of your old tracks, including the famous Paperboy reworked in the punk style. Can we expect more classic Kunt tracks to be re-born?

Because of the pandemic and all the lockdowns, I've made a point of not really making any firm plans for what I'm doing next, but given the resurgence of interest this year in my musical about the kidnapping of Shannon Matthews I'm hoping to use that as a springboard to finish writing my musical film I Swear, basically a foul-mouthed Footloose... but then I've been saying that since 2013, and it's still only 8 pages long.