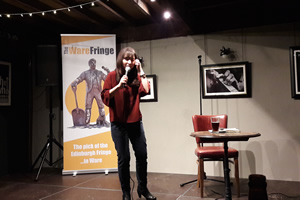 The Road to the WareFringe, Part 4

Having just put on his own mini comedy festival, Si Hawkins shares 10 tips he's learnt about organising such an event.

John Osborne, who you might have recently heard on Radio 4, is back at the Fringe this year.

'The greatest TV show ever made'

John Osborne, who you might have recently heard on Radio 4, is back at the Fringe this year.

The Newsagent's Window's the engaging story of how John Osborne and a friend move into an unfurnished house, only to realise they need some furniture. Despite being the sort of people who prefer self-service tills at the supermarket in order to minimise human contact, they become enthusiastic users of the local newsagent's window to seek out bits and bobs for their new address - a place with a garden and "a pond that rippled with a chorus of frogs".

The script is peppered with beautiful flourishes and delivered by John with warmth. It stands out because it's done in front of a studio audience. It would have worked, I'm sure, as a dry read in the style of Book at Bedtime, but the programme is lifted by the audience's appreciation of the humour and pathos that run throughout.

John asks the man who sells them beds why he advertised in a newsagent's window rather than online. The man replies: "I hate online." And by the end of this charming half-hour, you too might be tempted to cut your internet connection and start squinting at the little cards in your local newsagent's window.

John Osborne, who previously brought us John Peel's Shed, explains what happened when he decided to pursue the shopportunities arrayed in The Newsagent's Window (Sunday, 7.15pm, R4). How it led him to acquire the entire VHS collection of a man who'd just discovered DVD, to an innocent session with a masseuse who looked at his back and offered useful life advice, plus an encounter with a vicar in Bungay "who used words like shenanigans, higgledy-piggledy and kerfuffle". The studio audience is big enough to laugh when called for and small enough to keep quiet when it's not. Osborne quietly makes a point about the nerve and generosity it takes to seek contact in the real world rather than the digital one, and the production has a dream-like air which makes it an ideal companion for those fending off the existential melancholy that is the Sunday evening ironer's lot.

Nearly ten years ago, student John Osborne won a box of records in a competition challenging listeners to write a slogan for the John Peel show. His winning nugget? "Records you want to hear, played by a man who wants you to hear them." You can see why his entry was picked - it's dry, avuncular and likeable, a bit like Peel himself.

And also much like this programme, in which Osborne uses his prize as a launch pad for a series of self-effacing and warmly funny anecdotes about how radio has affected his life. Listen out for the one starring a KitKat-eating skinhead: it's worth the admission fee alone.

In the real shed in the late John Peel's garden lived the vast record collection that he'd built up over the years on Radio 1. He'd mention it on air, take favoured groups (like Pulp) round it, occasionally run a competition that featured it. The winner of one of those competitions in 2002 was John Osborne, who won a box of records that took him eight years to listen to. It was such a rich and strange experience that he made a stage show out of it, took it to the Edinburgh Fringe and now here it is on Radio 4, an ode to radio and the joys of listening.