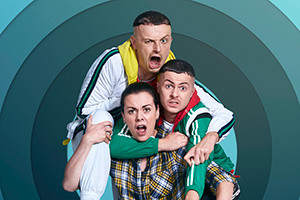 If nothing else good comes out of the pandemic at least there is a chance that more people will see The Young Offenders.

If recent hit Normal People offered one slice of young Irish life, The Young Offenders offers a very different one.

Jock and Conor balance stealing TVs with nappy-changing, as the Irish comedy that's a million miles away from Normal People returns.

The Young Offenders to return for Series 3

The Young Offenders is to return to BBC Three for a third series.

I'm always willing to give BBC Three comedy a try because occasionally it leads to discoveries of hidden gems such as the wonderful This Country. Like This Country, The Young Offenders is another low-budget piece focusing on a couple of youngsters who are presented as outcasts from society. Based on the film of the same name, The Young Offenders focuses on Irish teenagers Conor MacSweeney (Alex Murphy) and Jock O'Keefe (Chris Walley). This first episode is essentially an introduction to the characters, their world and the relationship that the pair share. It's clear that Conor is the smaller, smarter and less confident of the pair whilst Jock acts as his protector which is evidenced in an opening scene where he gets revenge against a bully whose stolen his friend's phone. The main focus of the plot is on the pair being put in the frame for a theft and facing the ire of their unpopular headmaster after they form a romantic attachment with his daughters. The episode also introduces Conor's fiercely protective mother Mairead (Hilary Rose) who, in one of the episode's funnier scenes, provides the boys with a flimsy alibi. As a sitcom, The Young Offenders didn't particularly make me laugh with most of the gags being fairly basic and not provoking anything more than a titter. But at the same time, the programme wasn't without its charm thanks in part to the two leads whose winning chemistry kept me watching the show. Murphy and Walley certainly understand their characters and their partnership is believable throughout even in the episode's more far-fetched moments. Furthermore, I appreciated the sentiment behind the episode; friends will always try to look like each other as that's a way of showing how much the other person means to them. However, I hope that now that the world has been established, the writing team behind The Young Offenders can focus on making it funnier as there's only so many episodes of a sitcom I can watch without it making me laugh. However, I would recommend you at least check out the opener of The Young Offenders on BBC Three as it's a show that has its heart in the right place and one that contains a believable chemistry between Murphy and Walley.

Interestingly, a homoerotic undertone is more than hinted at: the love the two scallies have for each other almost made explicit.

BBC Three is to film The Young Offenders, a six part comedy series based on the hit 2016 Irish film of the same name.